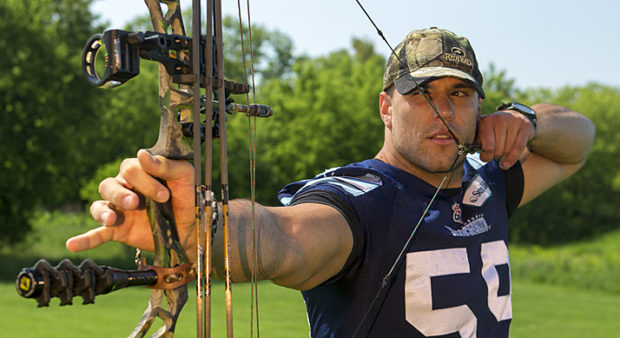 Ontario OUT OF DOORS assistant editor Steve Galea sat down with three players from the Toronto Argonauts to chat with them about their outdoor interests. This is Part 3 of a three-part series. Read Part 1 and Part 2.

Joe Eppele, the 26-year-old 6-foot-8, 304-pound offensive lineman for the Toronto Argonauts and native of Brackendale, B.C., is no stranger to the outdoors.

“My dad started me hunting and fishing when I was 4 or 5 years old. I grew up with access to lakes, rivers, mountains, mule deer, and blacktails. We hunted duck and grouse, and collected wild mushrooms. We did it to put food on the table.”

“The outdoors helped instil a lot of good qualities in me and taught me some valuable lessons,” he said.

Although he confesses to being handy with his .308 lever-action, he’s also recently taken up bowhunting and loves it.

His favourite deer hunting story was when he shot a trophy deer he and his dad had been chasing for three seasons.

It fell in rough country, so he enlisted his father’s help, telling him he had shot a little spiker.

“He was grumbling about me taking him through all that rough country for a little deer, but the look in his eyes when he saw the buck is something I’ll never forget.”

Eppele said the outdoors, and hunting in particular, is part of who he is. “Hunting gives you the opportunity to get away and be with the people you love. It gives you a chance to reconnect and it puts everything into perspective.”