Understanding the rut and how to hunt it 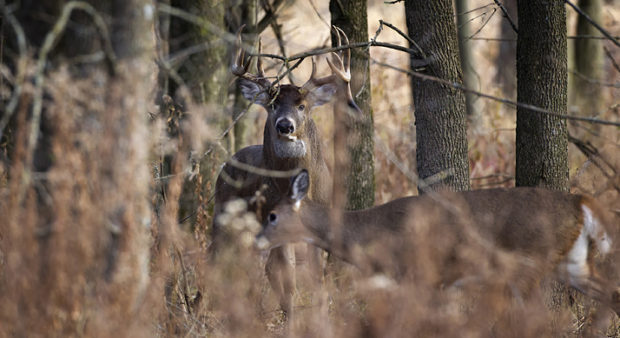 White-tail breeding, or “the rut” as hunters like to call it, is a complex set of biological behaviours that deer engage in each fall. It’s interesting and complex enough to be covered in a hefty book but hunters can boil it down to four important periods.

1) Pre-rut
During this phase, bucks shed their velvet and near the end of the phase they start actively making scrapes and rubs. In Ontario, the phase generally starts in mid-September goes until late October. This is the time when hunters should position themselves over food sources and along rub and scrape lines can pay off.

4 Tricks for hunting the rut

1) Hunt between does. If you know where two or more groups of does hang out, look for logical funnels or corridors between them. Bucks use corridors to cover their movements as they travel from group to group.

2) Hunt all day. You are just as likely to see a buck at noon as at the crack of dawn when they are searching for hot does. Change spots and tactics if you want, but stay in the woods all day.

3) Call. The normally solitary big bucks are actively looking for other deer. Make sounds like mating deer and you’ve got a chance at calling in a buck you may not have seen otherwise.

4) Don’t forget the basics. Even though bucks are distracted by the rut, they don’t throw all caution to the wind. Make sure you play the wind, stay hidden, and keep quiet.

2) Chase phase
This is when bucks start actively roaming, looking for does — of which there are few — that are ready to breed. Bucks are on their feet much of the time, even during daylight hours, moving from spot to spot, searching for willing does. This is a great time to call, sit in a stand near a natural or human-made funnel, or still-hunt (as opposed to stalking) a doe’s bedding ridge to try to intercept these cruising bucks.
Where you’re located in the province and the age of the bucks in your area will really dictate when this phase occurs. Mid-to late October is a general time period. It’s right after the pre-rut.

3) Breeding
When does are ready to breed, buck sightings often drop-off. This is because when bucks are actively mating, they aren’t moving as much. When they do move, they often don’t need to go far to find a doe. During this phase it’s often good to cover ground still-hunting and to drive heavier cover to flush out a doe and her male companions. This phase happens during late October to mid-November.

4) Post-rut
Once most does have been bred, normal activity levels slowly start to return. Bucks start to think about food again, although a late-cycling doe will still be attractive. Bucks return to sun-up, sundown, and nighttime activity. This phase generally runs from mid-November until the end of December. Early in this phase calling and tracking (if you have snow) are good tactics, but towards December concentrating on food sources is your best bet.

3 tips for pushing the bush