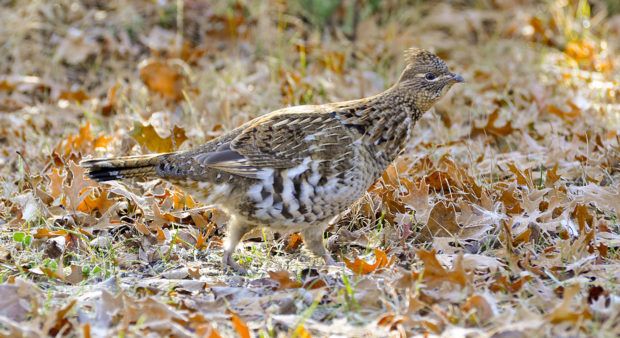 Some hunters seem to have a sixth sense about where ruffed grouse will be located. These are the guys who suddenly become serious and tell you to get ready because the thicket ahead looks “birdy.” And, often, the whirring rise of a grouse beneath a pointer or flushing dog proves them correct in the most dramatic way. Want to be numbered among the upland elite? Here are 10 tried-and-true ways to put more birds up in front of you this fall.

1. Scout year-round
I’m not saying every trip in the woods should be built around scouting for grouse, but when you’re out there doing something else, pay attention. Keep an eye out for birds, good-looking cover, clearings in the woods, new trails and huntable properties.

Explore creek bottoms while you’re fishing. Note those isolated hawthorn patches while walking the dog. By the time hunting season rolls around, you’ll have the enviable problem of too many choices, rather than not enough. And more choices translate into more grouse encounters.

2. Listen to distant drummers
A common misconception is that grouse only drum in spring. In fact, cock grouse drum year-round, although most frequently in spring. When walking in grouse country, remember places where you’ve heard drumming and note them.

A few spots like this provide good starting points for future hunts, because ruffed grouse live within a relatively small home range. Biologists believe that when young grouse settle after late September dispersal, they live their entire lives in less than 40 acres; adult males establish even smaller territories of six to 10 acres. Naturally, these averages are based on ideal grouse habitat. Ministry of Natural Resources Biologist Pud Hunter believes that in southern Ontario’s busier and more developed landscapes, home ranges might be twice as large.

“People, vehicle traffic (such as ATVs and tractors), and thinned-out habitat tend to keep these suburban grouse a little more mobile,” he said. In general, though, the better the habitat, the smaller the home range. The lesson here is that this fall, when you’re in good cover, work it thoroughly.

3. Think like a grouse
In this case, being bird-brained isn’t a bad thing. When looking for new spots, remember, to grouse, only two things matter: food and cover. You’ll rarely find birds too far from either and, if an area satisfies both requirements, chances are a bird will be there. Grouse are known to eat hundreds of foods, but some of the more popular items on the menu here are hawthorn and dogwood berries, aspen, birch, hophornbeam(ironwood), crabapple, apple, wild grape, cherry, poplar, acorns and clover. Some of these provide excellent cover as well, an important consideration for grouse, which fall prey to everything from goshawks to domestic cats.

Being able to rhyme off grouse foods on a list is one thing, but recognizing the plants year-round and in the field is quite another thing. If you’re not good at identifying plants and trees, carry field guides in your pack and use them. Aside from helping you find grouse habitat, it’s fun in its own right and ultimately useful to your education as an outdoorsperson.

4. Check crops
Whenever you have a dead grouse in hand, take a minute to check its crop. A quick incision at the base of the throat opens the crop and reveals recently ingested foods. Don’t rule out doing this to road-killed birds either. Nothing is more instructive. An inspection will tell you exactly what the bird was eating, often helping you to pinpoint nearby concentrations of food sources and pattern birds. This is a critical piece of the puzzle. One bird, analyzed correctly, often leads to another.

5. Understand and anticipate seasonal changes
How many times have you heard the complaint that deer hunters must have shot or scared all the grouse because they’re not where they were prior to big-game season? I’d bet a double flush into blue sky that most times the problem is grouse switching food sources. Their preferences change as different food sources and cover occur. Birds you found in the early season won’t necessarily be there in November.

For instance, in a diet study of ruffed grouse south of the French and Mattawa River, aspen buds, fungi, hawthorn fruit, and clover were prominent foods in September. In October and November, hawthorn fruit accounted for more than 30 per cent of their diets, and hazel, hophornbeam(ironwood)catkins, and assorted berries became significant fare too. Later, aspen, especially stands of male trees, were especially important. Hazel, birch, and hophornbeam catkins also helped get birds through until spring.

Food sources vary locally, but generally, clover is a great early season bet because it provides cover and harbours lots of bug life, particularly critical for young grouse and adults then. Berry patches, wild grapes, and apples are good mid-to-late season bets. Become familiar with a variety of habitats and you won’t get caught only knowing the places where grouse were last week.

6. Hunt the dark growth
For the most part, grouse feed in early morning and late afternoon and it doesn’t take long for them to fill up. That’s why hunting cover around feeding areas is just as important. Coniferous trees near creek bottoms, marshes, and food sources are places to investigate in the fall. As the season gets older and winter approaches, this “dark growth” is even more significant.

Along the same lines, don’t be afraid to explore unconventional places. I know of two tiny islands in the middle of marshes that hold grouse. I learned about these while duck hunting. Both are covered in thick spruce stands and are an easy glide to good food sources. As far as I know, I’m the only one who hunts them. Each year they’re good for a few flushes.

7. Ask around
Many grouse hunters make the mistake of limiting themselves each season to the few coverts they know. While these might do just fine, adding new coverts to your list puts less pressure on all the birds you hunt and sometimes saves the day when other hunters have gotten there first. Many of my best grouse spots were discovered in casual conversation with snowmobilers, ATV enthusiasts, deer hunters, and even horse riders. These people use trails and cover a lot of ground. Horse riders, in particular, pay attention to where grouse are because flushing birds sometimes startle their animals.

Late summer is also the time to ask permission to hunt on private property and secure those old apple orchards or hawthorn-infested creek bottoms.

8. Happy trails
Snowmobile and ATV trails and old railway lines often pass through prime grouse habitat and, in a sense, create it because of the edge cover on both sides. They’re also an excellent means to travel from covert to covert and allow you to baseline with a compass and explore farther. Walk them before the season. You’ll often see birds filling their crops with gravel and, at the least, you’ll be able to mark several adjacent coverts worth hunting this fall. Once the season starts, however, be sure to get off the trail and into those impenetrable tangles to flush birds. The odds are, other hunters have already pressured the birds too close to the paths, but that tangled stuff 50 yards away might be an entirely different story.

9. Remember when
Some guys remember each and every bird flushed and where. Not me. That’s why I try to record every grouse encounter. A simple record noting where and when a grouse flushed will suffice. Serious hunters might also note crop contents, time of day, and other details. Some merely mark an X on a topographical map. Whatever. This sort of record comes in handy after a few seasons.

Certain spots, such as one wild grape tangle over the rock pile in our backfields, seem to attract grouse year after year. Knowing this allows me to approach with dog and gun ready. Unfortunately, it doesn’t help my shooting when a bird explodes from cover. From my notes, I also know that once the snow is down in late season, I should hunt the conifers beside the cedar swamp on the west-facing slope of our property in the afternoon and on south-facing slopes in the morning. This is the sort of detail that records like this will remind you of.