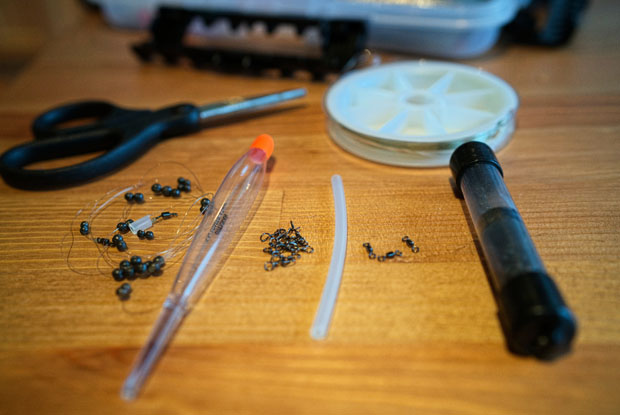 Eric Riley of Ottawa, one of my float-fishing mentors, has been centre pinning for about 13 years. With only a day to hit the tributaries together, Riley had the idea to pre-rig shot lines of various lengths and weights using Mustad Fastach clips from his ice fishing box.

It meant we could quickly swap out shot lines without having to re-tie. No more adding, removing, or re-arranging split shots on our mainlines to match conditions.

Maybe I’m impatient but I detest fumbling around with cold fingers, rigging lines when I could be fishing instead.

Maybe I’m impatient but I detest fumbling around with cold fingers, rigging lines when I could be fishing instead.

Pre-rigging shot lines is simple, you just need some common materials: fluorocarbon or monofilament leader line, split shots of various sizes, and micro swivels. We normally tie our shot lines using eight-pound test as we run a 10-pound mainline and a six-pound leader.

The total length of the shot line depends on the depth of the water and the speed of the current. We pre-tie rigs in one-foot increments and carry an assortment of lengths.

The amount of weight used on each shot line is determined by the rating of the float we intend to use it with. The goal is to have the float cocked just right, so that it rides correctly in the current but can be pulled under by a fish with minimal resistance.

If we are using a float rated for six grams, we start with six grams of shots, and adjust based on the bait we plan on using. Once the proper combination has been determined, we save the specs in a spreadsheet for future reference.

It’s worth noting that the way the shots are dispersed along the shot line has a big impact on how the bait is presented to the fish.

It’s worth noting that the way the shots are dispersed along the shot line has a big impact on how the bait is presented to the fish.

Normally we start with a basic tapered shot line (evenly dispersed shot organized from largest to smallest) but in some situations we may bunch up the shot, either closer to the float or to the bait, to adjust to the conditions.

Our shot lines are finished with micro swivels at the top and bottom. An optional step is to glue the swivel knots for added piece of mind.

We rig a size zero Fastach clip to the end of our mainlines instead of tying off directly to the micro swivel at the top of the shot lines. A small piece of float tubing is then slipped over the connection for added security.

Once tied up, we store our pre-tied shot lines in small zip lock bags labelled for weight and length.

I’m a couple of hours from the nearest tributary, so planning ahead and pre-rigging has been a real time saver. It also enables me to fish more effectively, and to quickly adjust to conditions as I go from spot to spot.

Catch your own bait