The fabled and fabulous Nipigon River 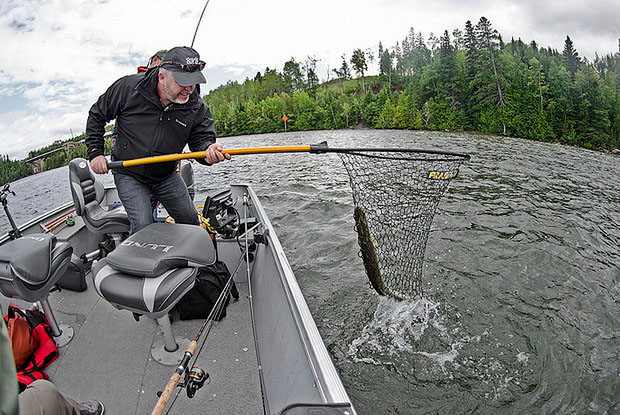 On his third cast into the Nipigon River, my father is angling a decent fish. By the time I trudge down the riverbank, Gord Smedley has a gloved hand gripping the tail of a 16-inch brook trout.

She’s undeniably beautiful, wide in girth with her deeply coloured, bespeckled hide resplendent in the late August sun. It’s a big brookie by most standards, but we are on the Nipigon River, and as my dad would soon discover, the fish now swimming back to the slack water behind a group of boulders is well below average.

I arrived a few days earlier, joining fellow writers and editors with Ontario OUT of DOORS magazine. The legendary angling was a factor in choosing the Nipigon/Red Rock area for our editorial meeting, and the historic lodge accommodations, unrivalled food, and guiding services offered by Nipigon River Adventures made it easy to hone in on a suitable venue.

Lodge owner, Ray Rivard, says a pulp-and-paper company built the horizontal-log structure in 1937 for its executives and customers. Today it offers visitors comfortable guest rooms and a cathedral-like living area built around a massive stone fireplace and windows that overlook the angular islands at the mouth of the Nipigon River. “The fishing is pretty good, too,” says Rivard, with characteristic understatement.

All work and no play
It’s amazing how efficient outdoor writers can be with the right motivation. Immediately after our productive morning meeting, we pair up anglers with guides and hit the water. Managing Editor, Ray Blades, and I launch into Jesse Lake to enter the canyon-like narrows of the Split Rock area, where the Nipigon flows around a cluster of tree-topped rock columns.

The water is high and strong and we blast through standing waves that make my 18-foot Lund feel like a car topper.

The water is high and strong and we blast through standing waves that make my 18-foot Lund feel like a car topper. In spite of menacing waters, Ray plucks his first Nipigon brook trout, a lovely specimen of about 18 inches, from some shoreline slack water.

Next day Ray jumps into Gord Ellis’ boat and Editor-In-Chief, Lezlie Goodwin, and Digital Content Editor, April Scott–Clarke, join me in launching into the lower river where pulling crankbaits over current-swept structure for brook trout accounts for several lakers, and a couple of chunky incidental walleye, which we release.

Testament to Gord’s guiding and Ray’s tenacity with the fly rod, the Ellis boat lands a few speckled trout from a shallow flat, which Ray tops an hour later, plucking a 23-incher from a nondescript shoreline.

A change of the Gords
After the OOD crew pull out, our fathers — Gord Ellis Sr. and Gord Smedley, join us. The Ellis boys are Nipigon veterans, but my dad has never been on this fabled trout river. We launch at Pine Portage Dam into Forgan Lake.

Essentially a flooded section of the Nipigon River, the strong current, rocky islands, shoals, and narrows present a dizzying number of places for trout to hide. The Ellis boat continues north while Dad and I stop at a shallow run that lends itself well to shore fishing.

This is where Dad hooks his first Nipigon brookie on the third cast. While he continues with spinning gear, I head upstream with my fly rod. There are no rises, but I tie on a dry fly and cast above an enticing boulder run. It takes a few tries to get a solid dead drift, but when I do my Stimulator is sucked from the glassy surface.

“Got a good one, Dad,” I call out as my father turns to see a 20-plus-inch trout jump clear out of the water and spit the barbless hook with a vigorous headshake.

“Got a good one, Dad,” I call out as my father turns to see a 20-plus-inch trout jump clear out of the water and spit the barbless hook with a vigorous headshake.

I return to the boulder run and cast toward a dark strip of water just off the steeply sloping granite shoreline. My fly disappears with an authoritative boil, but my hook-set falls short. Subsequent attempts to fool the fish fail. 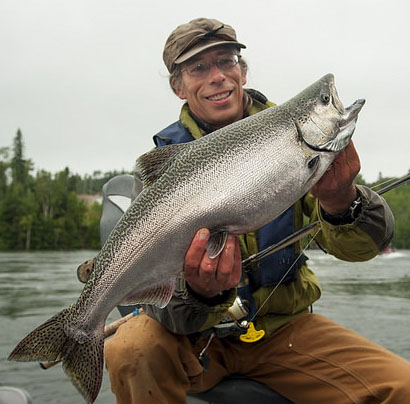 Out of desperation, I grab my spinning rod and rip a lure through the zone. At 23 inches, the duped fish turns out to be the largest trout of the day — but one I really wish I’d caught on a fly.

An early run of chinook
Next morning, we launch into the lower river at the Nipigon Marina and start trolling long and slender crankbaits over the undulating bottom, before the first salmon hits. I know it’s a salmon because of the savage aggression telegraphed up the line. But it isn’t long before I feel the tell-tale shimmy of my J13 Rapala.

It seems the chinook are toying with us. I glance over at the Ellis boat and see Gord Jr. leaning back against a well-arced rod. Moments later, he’s seated, shoulders slumped.

Dad is the next to lose a salmon. After a hard smash, a lively battle ensues. I’m alarmed by the amount of line being paid out to the aggressive fish. I decide to assist my father by cranking up the drag on his reel. A few violent headshakes later and Dad’s slack line is wallowing in the breeze.

I sheepishly relay the incident to the Ellis boat as they troll by. When I finally hook into another salmon, Gord Sr. calls out with a grin, “Tighten up your drag.”

I elect not to. Instead, Dad gets behind the wheel and we follow the fish downstream as I gain on it. It’s not a huge salmon, maybe 12 pounds, but it’s been airborne six times since it was hooked. When I finally angle the vivacious fish to the net, I’m already daydreaming about its performance on the grill.

Dad’s next fish is a four-pound lake trout, which he elects to bring home to my mother. When we leave the river, we have a feed of fish and more than our limit of Nipigon memories.

This article originally appeared in the July 2015 edition of Ontario OUT of DOORS. To read more features like this one, subscribe today.