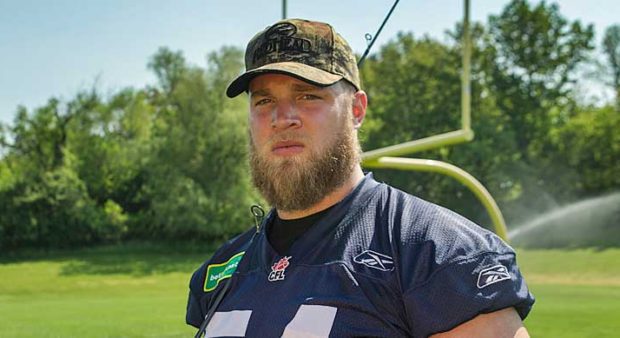 Ontario OUT OF DOORS assistant editor Steve Galea sat down with three players from the Toronto Argonauts to chat with them about their outdoor interests. This is Part 1 of a three-part series. Read Part 2 and Part 3.

You’d think few thrills could rival being part of a Grey Cup winning team. But Chris Van Zeyl, Toronto Argonauts offensive tackle and a key member of the 2012 Grey Cup championship team, would tell you that’s only because you’ve never been bowhunting.

“I arrowed my first deer last fall in central Ontario and it was right up there with winning the Grey Cup,” he said.

Van Zeyl, a native of Fonthill, is one of three Grey Cup-winning Argos who are outdoorsmen. The 30-year-old, 6-foot-7, 300-pound offensive lineman has been an angler since he was 5 or 6 years old, but hunting is relatively new to him and he’s smitten with it.

“We travel all over the province for walleye, crappie, pike, or even catfish, and I ice fish a lot, too. But there’s something really special about hunting. There’s a greater challenge; there’s more at stake.”

Van Zeyl is the first hunter in his family but says he won’t be the last. “My fiancé knows that when we have children they’re going to be part of this. It’s important to pass along. Otherwise it’s lost.”

When speaking of the outdoors, there’s passion in his voice. “You need to get out there and experience it and see what the world has to offer. You miss this stuff if you spend all your time in the city.”