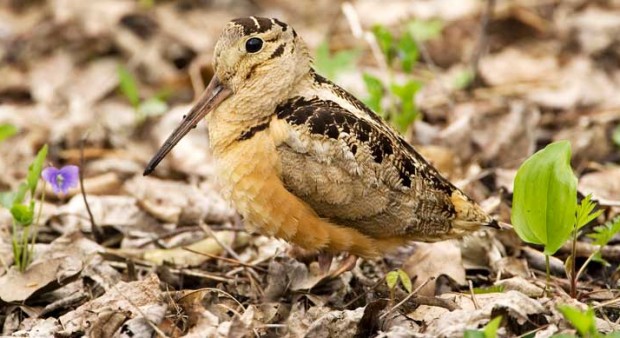 When Kathy Jones of Bird Studies Canada called during the winter of 2013 to ask if I still wanted to participate in the U.S. Fish and Wildlife Service’s (USFWS) woodcock singing ground surveys, I just about did my own version of a sky dance. Yes, I was that happy. I’d been looking for a way to give something back to the uplands that have provided me with so much. Some hunters build nesting boxes. Others cut browse or tramp down winter trails for deer; most donate or raise funds for conservation initiatives. Each spring, from here on in, I’ll be counting woodcock. They’re worthy of that effort.

The greatest little game bird
You’d be hard-pressed to find a better game bird for dog and wingshooter alike. When migrating woodcock flights descend into local covers each fall, every upland bird hunter I know grows a little more restless. We know these little birds are fleeing northern winters. We’re well aware they’ll be gone once the first hard frost prevents them from sinking their pointy bills into the soft soil — where earthworms, their primary food, live. But mostly, we understand that during this all too brief stopover, every day spent doing anything but walking the uplands with favourite gun and dog is a day we’ll regret. Most woodcock hunters also know there continues to be concern for woodcock populations — mostly due to changing habitat. So when someone gives you a good excuse to drive along a scenic rural road at dusk in late April or early May so that you might hear, count, and report the nasally peent call of malewoodcocks looking for partners, it’s difficult to say no.

Science-based bird watching Needless to say, there’s a purpose to all this counting. Data from Ontario’s 87 singing ground survey routes is handed over to Bird Studies Canada, which oversees the project in conjunction with the Ministry of Natural Resources and Environment Canada. This information is given to the USFWS, which compiles numbers from approximately 1,500 singing ground survey routes across northeastern North America. They then compare the 2 most recent years to get a sense of short term trends; the last 10 years to understand longer trends; and numbers since the survey’s inception in 1968 to get the big picture on North America’s woodcock population. Each spring’s survey data provides timely information to game managers and influences woodcock management programs throughout North America. In short, participants in the singing ground surveys provide valuable raw data used to help maintain woodcock numbers. I’m proud to say Jones notes many of these participants are hunters.

…the historical decline in
the Ontario population is slowly
beginning to reverse itself.

Time and place As special as woodcock are in autumn, they make me smile most come spring. Then, the male’s distinctive call and dramatic sky dance ritual to attract a mate are, to me at least, the cheeriest indicators of spring’s return. These activities also make it easy to locate woodcock, which is why we count them on the singing grounds. The survey is simply a standardized way to do this across the range. My route, which is known as 131, begins near Dorset and, like all routes, covers 6 kilometres of secondary roads that pass through woodcock habitat that was first deemed favourable in the 1960s. Routes are constantly being re-jigged or discontinued, to reflect changes when woodcock are no longer present. When surveying active routes, volunteers pick a day when sound will carry best (meaning they avoid windy or rainy conditions) between April 20 and May 20, when woodcock breeding is taking place. They then go to the appointed starting point of their route and, shortly after dusk (around 9 p.m. last year) drive exactly 0.6 kilometres and stop for 2 minutes. During this time, surveyors listen for woodcock peenting and record the number heard. Each route has 10 stops like this, which must be completed without interruption. Each route is surveyed once per season. It’s fun, but, because of the strict time constraints, a bit hectic too. That’s why I’d advise bringing along another interested party to help time, listen and record events. Gundog Editor Tom Goldsmith rode with me last year and helped count 7 vocal woodcock along a route that transected open meadows and skirted a lake, hardwoods, and evergreen stands. Like me, he enjoyed participating and is already committed to doing it again in 2014. In fact, I understand he’s got his own route now, too.

What we’ve learned As previously noted, the information gathered is compared to other years and provides useful information. For instance, the 2013 survey results showed no significant difference in the number of woodcock heard in 2012 and 2013. Better still, it indicated that numbers had remained relatively unchanged during the last 10 years. That’s not to say everything is perfect. Continentally, the surveys show a 0.89 % decrease in woodcock heard annually between 1968 and 2013. Jones said the 10-year trend is good news, however.“Hunters can rest assured that the historical decline in the Ontario population is slowly beginning to reverse itself, as there has been no change in the number of American woodcocks heard during the last 10 years,” she said. All these reports are available on-line at www.fws.gov/migratorybirds/NewReportsPublications/ PopulationStatus.html.

Volunteers wanted Jones would also like to remind readers that routes become available every year throughout Ontario. She recommends potential surveyors check out the American woodcock pages on the Bird Studies Canada website at www. birdscanada.org/volunteer/onamwo. This site features a map of routes and indicates what is available. Don’t be discouraged if there isn’t an open route in your area. Instead, contact Kathy Jones, Bird Studies Canada’s Ontario programs volunteer coordinator, at volunteer@birdscanada.org or call at 1-888-448-2473 ext. 124. She’d be happy to place you on a waiting list, just like she did me. And, if you are lucky, come spring you’ll be hunting woodcock in a wholly different way.

A version of this was first published in the May 2014 issue of Ontario OUT OF DOORS.