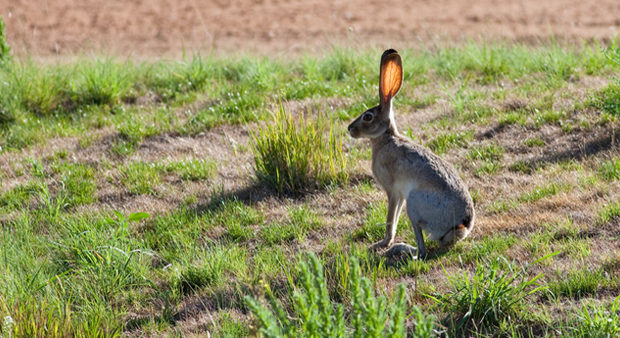 Norfolk County is dotted with tobacco kilns, ginseng gardens, woodlots, century homes, roadside markets, and pretty little towns. It’s contained by big skies and fragrant cedar windrows. The people here are rooted in the land; stewardship is important, and simple country traditions still count for something. Norfolk County is what much of rural Ontario used to be.

These days there’s good news there too. At least it’s good if you’re a hunter. For in Norfolk County, as well as in much of Ontario’s south and west, jackrabbits are back.

I arrived at the Scheers farm near Delhi at 7:30 a.m. Overnight, a fierce winter storm had swept in from the west. Snow swirled across the flats and drifts leaned high against the bone-white tobacco kilns and cedars. But, as I parked, a deep-blue sky was being unfurled by the rising sun. You couldn’t ask for a nicer February morning.

By 8 a.m. a dozen hunters had gathered for coffee and doughnuts inside the empty tobacco-stripping barn. The scene, I imagine, couldn’t have been much different from those of 40 years ago when jack rabbit drives were a rite of passage for adult hunters and farm boys of southern Ontario. There was laughter, farm talk, and news from surrounding communities. The morning’s manoeuvres were planned and old friendships renewed. There was the aura of a good deer camp. And there was eagerness too, for 2004 was a great year for jacks.

John Ryder of Delhi is a farmer. Like many other locals his age, he grew up hunting jacks, more correctly known as European hares, in the big concession-to-concession drives of days gone by. He’s been chasing them, on and off, for about 50 years. He and others in the gang remember the mid-1960s as the heyday of the hare in the southwest. Then, jacks were sometimes seen in the sandy tobacco-growing soil around Delhi, but they were more common in the clay belt to the southwest. Ryder said, “There were more fencerows there and the crops were better suited to rabbits.”

The older hunters observe that hare populations crashed somewhere around 1970. Some biologists, such as Pud Hunter of the Ministry of Natural Resources(MNR)Aylmer District Office, suggest that DDT and other pesticides contributed to this. But Allan Boraski of Wilsonville, also an avid rabbit hunter, believes other factors brought this about.

“Mostly, I think it was predators and changing land-use practices,” he said. “We shot our first coyote here in 1966. The decline of the jacks coincided with increased coyote and fox numbers.” About the same time, he adds, more efficient farms gobbled up edge cover that jacks needed to avoid predators.

Whatever the reasons, by the early 1980s most hunters had given up on them and by the 1990s these sporty hares were largely relegated to stories of the good old days. Even the popular Boxing Day drives were replaced by trap shoots.

The pendulum swung back in the mid-1990s. That’s when Ryder began noticing the jacks again. “They were eating tobacco, something they never used to do. Even waterlines were not safe…I’d tell people that we had a jack rabbit problem and they’d laugh. But within two or three years people were noticing.”

Ryder believes that, once again, changing land use and predator populations were responsible. “People were planting hedgerows and building ponds. Some switched from growing tobacco to cash crops or orchards. There were better farming practices too. And mange knocked back our coyotes and foxes. All this was favourable to the jack rabbit. Around here, they came back with a vengeance.”

For Ryder and his neighbours, the old days had returned. He began organizing hunts again, often responding to requests from neighbouring farmers who considered jacks to be a pest. Since then, Ryder’s gang and others have had no shortage of hunting opportunities.

This is why I was in that tobacco-stripping barn on that day. Steve Scheers of Delhi provided the gracious invitation. Aside from being a competent sportsman, Scheers is also Norfolk County’s superintendent of the Forestry and Cemeteries Division. I made his acquaintance while researching a story on pheasant hunting in Ontario. He happened to be the go-to guy in Norfolk. Some time during the interview he said, “We’ve got very good pheasant-hunting opportunities here, but our jack rabbit hunt is excellent.” Suddenly, he had my undivided attention.

After breakfast we drove to another farm, where John Ryder divided us into drivers and blockers. Even as he did, we watched a jack run across a distant field in a way that somehow reminded you of a gazelle on the African plain. The morning’s first hunt would sweep through that, and adjacent fields, from the far side of the concession, back to the barnyard.

Jason Ryder, John’s 28-year-old son, positioned me along a cedar windrow. To my left and right, a line of blockers formed, each covering one side of a hedgerow and the fields between.

The others got in trucks and drove snow-covered roads to the next concession line, approximately one mile away. There, they began walking hedgerows, one hunter on each side, towards us. After a few minutes, you could see blaze-orange specks in the distance. And, as they got nearer, sometimes you could see hares flush just ahead.

Some broke from the hedgerows, others leapt from their forms in furrowed fields, where they lay half-covered in snow, facing into the wind. For the most part they moved in little bounds, stopping after a bit to look around, but when they moved flat out, that was something.

Stewart Hazen of Delhi shot the first hare as it loped by him in the middle of an open field. A 3-inch load of BBs, fired from his 12-gauge, did the job admirably.

One thing you notice almost immediately is that there are no experts on a jack hunt. There are good gunners and experienced men, yes, and also younger hunters with more stamina and perhaps different ideas, but, all in all, the jacks seem to keep everyone honest and humble. One hunter is as likely to shoot as the next. The old ways seem as likely as the new. As hunting goes, this is about as democratic as it comes.

Rick Szabo of Waterford said, “It’s a great winter hunting activity.” He’s right; the hunting is best when almost every other hunt is closed. When the drivers met the blockers, we got into trucks and drove to the next area.

Three other drives were conducted that morning. Each covered between 200 and 300 acres of farmland. Of the old days, Boraski said, “The drivers would sometimes form an inverted V. The wingers tended to drive hares into the centre of the hunt.” Other than that, tactics remain relatively simple.

Most hunters use a 12-gauge pump or auto, with modified or full choke, capable of firing 3-inch shells or better. Lead BBs and 2s are preferred. Long running shots are common and often difficult, especially since these hares can attain speeds of 30 miles per hour and leap 12 feet at a bound.

Ryder says to treat them like you would a deer. “Stay still as they approach and try to get them before they’re moving flat out.”

By noon the gang had taken six hares. It turned out to be their worst hunt of the season, a testament to how good the season was.

We regrouped at the Scheers farm, grateful for the venison chili, pickles, coffee, doughnuts, and other fine country fare. This time, the hunters were red-faced from the cold, but somehow the smiles and laughter seemed warmer. Another hunt had brought them together. More fine memories were forged.

Rick Szabo summed it up. “I enjoy seeing the jacks again,” he said. “Even if you don’t get any, it’s just nice to live in a place where you can see them and hunt like this. It’s just good to get out with the boys.”

Yes, the jacks are back. Let’s hope they stay awhile.