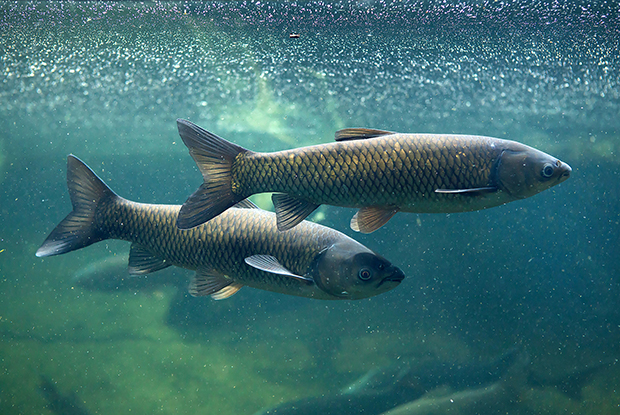 On May 27 two commercial fishermen on the St. Lawrence River, in the Lanaudière region of Quebec, caught what has now been confirmed to be an invasive grass carp.

The grass carp is one of four species of the highly invasive Asian carp. The grass carp caught by fishermen Pierre Thériault and Gerald Boucher was a female, coming in at 29 kilograms. The Quebec Forests, Wildlife and Parks Ministry has confirmed the species of the catch.

Native to eastern Asia, the grass carp feeds on plant life, has a voracious appetite, and could have dire effects on Ontario waterways and associated industries. “According to the Socio-Economic Impact Assessment conducted by the Department of Fisheries and Oceans in 2014, if Asian carps become established in the Great Lakes, there will be major repercussions for both recreational and commercial industries,” said Brook Schryer, aquatic invasive species outreach liaison with the Ontario Invading Species Awareness Program.

“Losses are projected as high as eight billion dollars for Ontario’s economy by 2018 and over 170 billion dollars in twenty years [as of 2014 projections],” shared Schryer.

Anglers can help prevent the establishment and spread of this invasive species by learning to properly identify and report any catches of the four species of Asian carp: grass, bighead, black, and silver carp.

There are some key features to look for when differentiating between a common carp, which is not invasive, and the invasive species of Asian carp.

If you suspect you have caught an Asian carp, take photos of the fish, do not return it to the water and immediately contact the Invading Species Hotline at 1-800-563-7711, email info@invadingspecies.com or click here for more information.