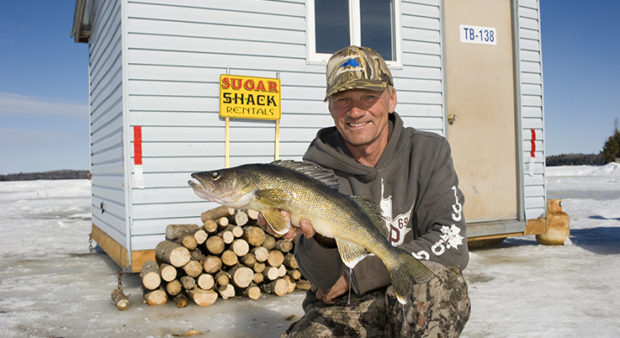 Ice fishing on Lac des Mille Lacs is unlike any northern-Ontario fishing we’ve done. Used to day fishing small “secret” brook trout lakes accessed by snowmobile or snowshoe, my father, Gordon Smedley, and I drive an hour west of Thunder Bay along Hwy. 17 to an access point at Sawmill Bay. Here, Gary McCourt conducts a stream of vehicles and ice shacks using the ice road he’s been ploughing for the last decade. McCourt steps out to meet us, along with Archie Hoogsteen.

A drive on the water
Hoogsteen runs Sugar Shack Rentals and will be guiding us. We step inside an “administration building,” which also houses McCourt’s immense plough truck. The walls are adorned with fishing articles and photos of fish and even a few of vehicles half submerged in the ice.

“You don’t have to worry,” says McCourt, sensing my concern. “There’s about four feet of solid ice out there.”

It’s mid-March and by this time last season, which was abnormally warm, the road was closed due to deteriorating ice. But, with this being a normal winter, we jump into our truck and follow Hoogsteen to the lake.

The original ploughed ice road was awash in up to 18 inches of water after a deep thaw a few days ago. It’s now mostly refrozen, but we take an alternate route, a single set of ruts that parallel the old road. The going is slow, but sure.

“Kind of nice not to have to repack everything into a sled,” I say. Dad nods, as he pulls up beside Hoogsteen, who’s stopped near an area known as Sand Point. Beyond, the road is a bumpy mix of refrozen slush that soon settles into hard-pack snow ushering us the remaining few miles to Sugar Shack’s cluster of ice houses near Coffin Island.

On-ice accommodations
Dad pulls the truck alongside our home for the next few days. It’s a blue-siding-clad 8×12 shack with a two-burner propane stove, folddown table, and benches that convert to a double bed. Large windows provide a view to outside lines and there are holes in the floor for fishing right in the shack. In one corner is a wood stove and stone backdrop, products of Hoogsteen’s background as a masonry contractor.

“Lac des Mille Lacs Hydro!” calls Hoogsteen’s brother, Peter, approaching with an extension cord running from a small generator. A light bulb illuminates the shack, as we scramble to move in and put a few lines down. While I manage to jig up a pike and a small walleye from inside the shack, we both watch Archie and Peter running repeatedly from their shack to haul in walleye to 22 inches.

Dad’s luck is not so good. His setline in a rod holder outside the shack suddenly bends violently before being sucked down the hole. On inspection, we see the rod holder jammed part way down the hole and no sign of the rod. “There are some big walleye around; largest this year was over 9 pounds,” says Archie Hoogsteen, matter-of-factly.

After a taste of the action on Lac, we join the Hoogsteens for a steak barbecue. While our accommodations are decidedly utilitarian and functional, the Hoogsteens’ 12×16 shack is equipped with television, coffee maker, microwave, real wood panelling, and an airtight wood stove with glass doors, a prime example of one of the many upscale ice shacks dotting the lake.

Morning walleye
I step out into a crisp, sunny morning to see Archie Hoogsteen ghost past with a 21-inch fish. “Better get your lines in,” he says, as he slides the fat fish back down the hole. “I’ve got three already.”

Sure enough, the bite is on and the Smedley camp catches and releases several 20- to 22-inch walleye and a handful of 3- to 6-pound pike, keeping some 15-inch walleye to eat. Although jigging lures account for a few fish, the top producer is a set-line with a small green jig hooked behind the head of a medium sucker minnow dangled just off bottom of the 12-foot flat. The Hoogsteens, who favour a medium treble with a large minnow and split shot, continually outfish us.

Although Lac’s stained water means walleye bite throughout the day, with the sunny weather we’ve been experiencing, there’s definitely a spike in the action early morning and a few hours before dark.

As the sun climbs higher in the sky, Dad and I are seized with a profound hunger. Scant breakfast, combined with running for lines over the uneven hard pack and glare ice, has us thinking of sustenance.

While Archie Hoogsteen heats up the propane deep fryer and prepares the spice mix, Peter cleans the morning catch, dumping the walleye carcasses on the ice about 100 yards from our shacks. While the fish cooks, as many as eight bald eagles and one osprey vie for the carcasses – gliding silently overhead to swoop down, claws outstretched.

A mountain of golden walleye is stacked on a plate. There’s talk of cutlery, salad, and other accompaniments, but we end up eating chunks of crispy, hot walleye with our fingers until we’re stuffed.

Shack pioneer
Archie Hoogsteen claims to be the first to put a hut on Lac des Mille Lacs 21 years ago. “I remember my son when he was 2 years old standing on the bunk in his underwear looking outside at all the fishermen in –30˚F,” he says, nodding towards the original green plywood structure still on the job.

It’s well into evening before we’ve burned off lunch by fishing, reading, eagle watching, and cleaning walleye. In the shack’s warmth, we eat cabbage rolls and perogies, washed down with red wine, before pulling lines, stoking the fire, and crawling into sleeping bags.

Knowing we don’t have to pack gear in the dark and make the long drive home after a day on the ice is relaxing. We’re here for the night and set up to be fishing at prime time tomorrow morning and the morning after. Fishing with Sugar Shack Rentals is easy to get used to.

A Dusey of an adventure