Should we hunt calf moose? 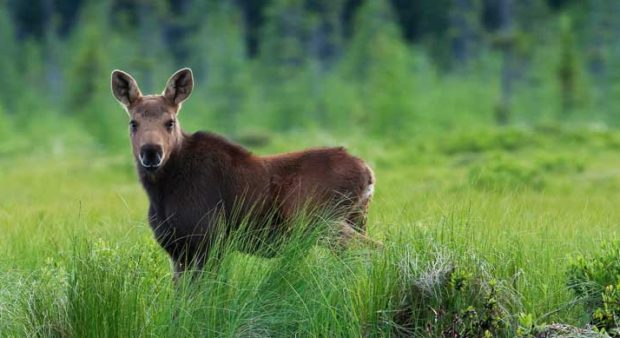 In 1983, largely in response to a declining moose population, Ontario implemented a selective harvest program. The system required hunters to purchase a licence to harvest a calf in any Wildlife Management Unit (WMU) with a moose hunt. Hunters wanting the option to harvest an adult moose had to apply through a draw. Tags for cows and bulls were limited and specific to each WMU. With the exception of a few tweaks, such as the 2004 introduction of calf validation tags in WMU’s 48, 55A, 55B, and 57, that system is still with us today.

The need for a selective harvest system was deemed more important than the potential over harvest of calves.

According to Euler, “It was important to provide every hunter with the opportunity to hunt moose, because we had to convince hunters to go with selective harvest, and it was thought that the harvest of calf moose at the levels envisaged was likely compensatory.”

In other words, if hunters weren’t supportive, the new selective moose harvest program likely wouldn’t have gotten the green light to move forward. And, if as thought, calf hunting mortality was compensatory, so much the better. However, compensatory calf moose mortality – calf moose shot would mean less calf moose dead because of predation, disease, accidents or whatever, and the same number would be alive at the end of their first year – hadn’t been proven. Given time, managers believed they’d know more about how well open calf hunting worked, and would adjust the program as required.

It’s been 30 years since Ontario went to the selective moose harvest program. Many moose biologists are convinced calf-moose hunting isn’t always compensatory. It’s at least as likely to be additive in some situations (meaning that hunters are harvesting moose in addition to the percentage of calves dying of other causes), resulting in low moose populations, but changes to address the situation have been hard to come by.

Around 2007, largely owing to complaints about “the draw,” the minister of natural resources ordered a review. Included in the direction was an examination of how to implement greater control over the calf harvest.

Gord Eason, MNR Wawa biologist, led part of the review from 2007 to 2009. He noted that data showed about a dozen WMU’s had a consistently low calf component, and modelling of virtually all moose WMU’s suggested that if the calf harvest were cut in half, there would be “a bump in adult tags of 10 to 50%.”

Management options
In 2009, the MNR published several documents, including a new “Moose Management Policy” and “Moose Harvest Management Guidelines.” Consistent with the policy, the guidelines provided two options that could be used to control calf harvest: a shorter calf season within the regular season, and a draw for calf tags.

Eason thinks most moose hunters want to hunt adult moose, and wonders why attempts to cut the calf harvest — which might eventually result in a doubling of the adult tags available — has been such a hard sell.

Mark Ryckman, senior wildlife biologist with the Ontario Federation of Anglers and Hunters (OFAH) says the OFAH supports calf hunting as it now exists. Cutting the calf harvest in select WMUs may result in more adult tags, but would also reduce the number of overall opportunities for moose hunters.

Ryckman questioned the need to target only licensed moose hunters for change. “If calf recruitment has been identified as an issue in a specific WMU, then we need to look at all causes, including ticks, predation and unregulated harvest,” he said.

Ryckman pointed to the many options available to MNR in their moose management tool box, some of which could be used to help populations grow, resulting in more hunting opportunities. “The OFAH recommends that all management options (e.g. predator control) must be fully evaluated and implemented using a targeted (i.e. WMU-specific) approach because calf overharvest is not an issue in all WMUs,” Ryckman said, and added that public input is also required.

Eason agreed there are a number of other factors affecting moose populations and adult tag numbers that are just as important as calf over-harvesting.

Eventually, there will be change. The MNR is undertaking two studies of Ontario’s moose hunters and their views on moose hunting and moose population management. These studies will address some of the OFAH’s concerns regarding public input.

Harvest decline
Reviews, reports, and studies continue to be produced. Meanwhile, the harvest of moose declines. The highest moose harvest recorded in the province occurred in 1968, when 14,500 moose were estimated to have been taken by licensed hunters. After the selective harvest system was implemented, moose populations did seem to stabilize. In the 1990s, populations and harvest levels, actually slightly improved. But over the last decade or so, moose populations and harvests have steadily declined, and in 2012 resident licensed moose hunters only took an estimated 6,260 moose. The tourist industry accounted for about 800 of those. No one knows how many were taken by First Nations hunters.

Moose biologist Dr. Vince Crichton told me that while it’s true multiple factors contribute to how many moose are in any given area, the unlimited hunter harvest of calves is “ludicrous when the population is down.” In Ontario, there are a number of WMU’s where moose are well below set targets, yet calves make up greater than 20% of the fall harvest by resident hunters. Some WMU’s show greater than 40% of the moose harvest to be calves.

Crichton explained that when moose populations have declined to low levels, natural predators are often a big problem, because bears and wolves can take a high percentage of the calves. Any further harvest of calves by hunters is simply additive. In Manitoba, studies on low density moose populations have shown black bears alone can take over 50% of the moose calves, and there’s no reason to suspect it’s any different over much of northern Ontario. Studies in several areas of North America have repeatedly shown that wolves kill mostly calves and old moose.

Crichton stressed that if moose live past their first birthday, mortality rates due to predation drop to low levels until moose are quite old. To thrive, good adult recruitment from calves is vital, as is letting adult cows live long lives. “Cow moose less than 10 years old seldom have twins,” he said.
Hunters — and I’ve shot several calf moose — need to think long and hard as to whether they should continue to support the present system that allows every licensed moose hunter to shoot a calf moose in almost any WMU with a moose season.

It seems to me that there are many issues affecting moose and moose hunting, but unless something is done, moose hunting in Ontario is unlikely to improve much, and that’s a shame.

Ask a CO: What is a maintained roadway?