Ruffed Grouse: Heir to the Throne 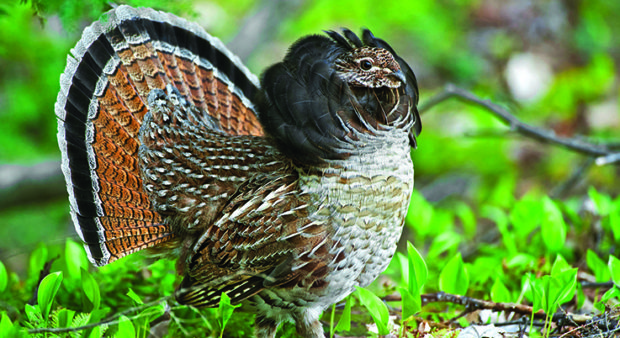 In an ages-old ceremony, the coronation of a king takes place in the early morning fog of a spring day. The young heir makes his way along familiar and traditional routes towards his throne. Once there, he surveys his kingdom and stands to display his audacious collar and ceremonial cloak in the subtle hues of his ancestors.

He proudly struts the length of his stage and then the drums begin to sound. With feet planted firmly, he beats his wings against his breast, creating a muff led thump that increases in cadence and urgency and turns in to drumming. All his subjects recognize this as a proclamation that a new king has indeed taken the throne.

Like everything in his majesty’s palace, his throne is understated in its decor. To most, it appears as a fallen log, beginning to decay back to the earth. The significance of its place in the king’s realm, though, is essential to the spring ritual to propagate and further the royal bloodlines.

Not just any log will do. A ruffed grouse’s drumming log must be of a size fitting his displays. Humans, in an effort to get an easy and dry source of firewood, can take too many of these deadfalls and deeply impact his kingdom. With no suitable thrones in the covert, the king is sent into exile.

Ruffed grouse and humans seldom share their environments well. What we might call a useless wasteland, a grouse sees as vital habitat. More and more enlightened conservationists interested in managing a place for grouse, though, leave a few fallen trees untouched as potential thrones for the next generation of royals.

Guarding the Crown
The king’s place on the throne is anything but secure, even from within. Many among his own loyal and not so loyal subjects challenge his position. He must be vigilant in protecting his queen from the young upstarts looking to test his resolve. These challenges are no less ceremonial than the king’s display.

The combatants use intimidation as their key weapon, strutting and challenging one another. Usually, these displays suffice, but occasionally push comes to shove – and to blows. Seldom is any real physical harm done, beyond a few ruffled feathers, but just the same, to the victor go the spoils.

External Threats
To a host of predators, grouse are simply prey. For this reason, undisturbed cover is vital to the king’s survival. To a predator, breaching the tangled and thick walls of his realm is daunting. The protection the hawthorns, canopy, and shadows provide all serve the grouse well. But, no covert is entirely secure. Goshawks, lynx, fisher, and fox have evolved alongside the grouse and adapted to its shadowy places. However, as indicated by their relative numbers in good habitat, grouse seem to have been able to retain the upper hand in that contest.

Under Siege
Ruffed grouse are not doing so well in their battle with humans. In fact, the grouse’s kingdom is under siege, but not by those who carry shotguns each fall, as many might want you to believe.

The greatest threat comes from well-meaning, albeit often misguided, wildlife activists who naively wish to stop the natural cycle of life, death, and rejuvenation. Their current thinking is to halt all large-scale cutting and only if absolutely necessary replace it with a selective harvest of individual trees.

While this might sound attractive to our human sensitivities and our wish to keep things the way they’ve been, it’s counterproductive to creating new growth forests that so many species such as grouse, moose, and a host of other life forms depend on. When you combine this thinking with society’s reluctance to allow a forest to burn, as has been nature’s way to clear the land for eons, the kingdom and all its subjects are at risk.

Barometer of the Uplands
Ruffed grouse are a bellwether species, like the veritable canary in a coal mine. For those wise enough to pay attention, the king has much he can bestow on us with regards to woodland health.

Ethical hunters, who have long been stewards of wild places, understand that change is as important to a forest as is nurturing it. Nature embodies and, indeed, depends on change.

Clean old-growth forests with little understory might make for picturesque wedding photos, but brides and grooms are among the few that benefit from them. Admittedly, this can be a hard sell for the king, who must depend on far too many who only see nature through a high-definition television screen. A clear-cut landscape or burn with rejuvenating broom-handle poplars and birch might not be the first choice for a calendar of tourist destinations in Canada, but they have their own kind of beauty. Fortunately, more and more of us are opening our eyes to the big picture in front of us.

The Drums of Hope
Perhaps ending where we began is fitting, with our new king still drumming his message to what might seem an apathetic population of forest creatures. His displays, however, haven’t been in vain.

A potential queen has heard his drumming and steps softly on the forest floor on her way to pay respects to the new monarch. Last May, she successfully fledged a large brood. This year, however, her mate of the last two years, a bird who wore the king’s crown so well, fell prey to a hawk in its own struggle to survive. Her offspring are also gone, the few survivors dispersed by the elements and the others suffering the many fates of nature.

Now, as winter loosens its grip on the uplands, an irresistible force to renew the process of life draws her to the sound of the drums. Upon arriving in the king’s court, she’s rendered helpless by her new suitor’s fanned tail and iridescent ruff, as it shimmers in the morning light. She’s found a replacement mate. Long live the king.