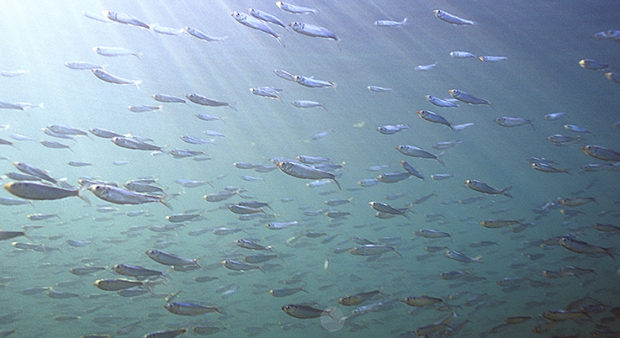 It’s opening day of trout season, the last Saturday in April, on Ontario’s tributaries. For the first time in over 40 years, I’m not on a river, but I am fishing, from a boat, only a few hundred yards out from Jordan Harbour on western Lake Ontario.

I’m with Shane Thombs and John Poirier, respectively vice-president and president of the Grimsby Strait Line Anglers Club. The nearshore action for salmon and trout has been on fire, so an invitation from Thombs was hard to refuse. He operates Fintastic Sportfishing.

We’re only in 30 feet of water, but the fish are here. Chinook and coho salmon, rainbows, browns, and lakers are swarming baitfish. Late April brings smelt into Lake Ontario beaches, followed by alewife.

In shallow water, stealth techniques are the only way to catch big numbers of fish. Thombs lets out the mast boards first about 100 to 125 feet. Behind the board, three colours of lead-core line trail about 90 feet. We’re also using divers and downriggers.

After the spread is set, I ask him about his success rate with shallowwater fishing. The mast board takes a shot and I tell him to hold the thought. What we think is an acrobatic steelhead turns out to be a 5-pound Atlantic salmon when brought to net. That, in itself, is the addictive nature of shallowwater fishing. You just don’t know what species of fish you will encounter next.

Throughout the morning, different rods take strikes from a number of fish. Chinooks are number one on the hit parade, but other boats report catches of cohos and browns. Using proven shallow-water tactics, most boats enjoy success. It’s all about timing.

In Lake Ontario, skinny-water action in the southwestern end usually starts in April when the water temperatures warm to about 40˚F. Lake Huron starts to peak a week or two later, usually in late April for cruising rainbows. Lake Erie and Superior tend to be June through August time frames.

Ask most shallow-water anglers about their must-have technique and the answer will be directional divers.

Divers are so popular and versatile that they’ve replaced the venerable downrigger. Divers consist of a plastic disc and adjustable weighted keel.They can be calibrated to track on either side of the boat and at different depths. The amount of line from the reel to the diver and the diver setting on a dial are used to obtain different depths.A trip mechanism negates the diving component when a fish is hooked.

With a lead of six to eight feet from the diver to the lure, the fish can be easily brought to the net.Walker Deeper Divers and Luhr Jensen Dipsy Divers are two major options.

Walker’s two smallest divers are the size 45 and 65, named for their diameter in millimetres. Luhr Jensen comparable sizes are the 30 and larger 0. Divers are sold in a wide number of attractor colours.Most boards and in-line boards can be difficult to use in crowded conditions with other boats or in the wind, but directional divers are not hindered. A No. 45 Deeper Diver or a No. 30 Dipsy Diver with 100 feet of 30-pound braid will run about 24 feet under the surface.

Slide divers are also popular and are usually fished off boards. They’re not directional, but can be used with long leads to the lure. A trip mechanism when a fish hits allows the diver to slide back to the lure.

Lake Erie
Rainbows are the shallow-water target fish here. Usually, they move in close to shore in June and stay there until August. Water depths can vary from 20 to 50 feet.

Jeremie Brooks, who operates Trophy Taker Fishing Charters, has a proven game plan for shallow-water rainbows. “Triple mast boards are set first at about 250 feet on both sides,” he explained. “Twenty-pound mono runs to the boards, with three to five colours of 27-pound lead core behind the boards. Twenty feet of 20-pound fluorocarbon leader acts as terminal tackle. In-line offshore boards are set 75 to 125 feet on either side of the boat inside the mast boards. Two to three colours of lead core off the back of the boards will put the lures down 13 to 17 feet.”

Closer to the boat, No. 1 Dipsy Divers with a ring are rigged at 3 or 3.5 settings anywhere from 45 to 60 feet on the line counters, putting the lures down 20 to 25 feet. Fifty-pound braid is used out to the divers, with 4 to 6 feet of 25-pound fluorocarbon from the diver to the lure. “My hint is to use two snubbers early in the year to control shallow ballistic fish,” said Brooks.

The last time I fished with Brooks, calm water and sunny conditions made for a challenging day. Other boats had difficulty getting into boatshy fish, but we hooked over a dozen rainbows.

Lake Ontario
Of all the Great Lakes, Lake Ontario offers the most extensive opportunity for skinny-water salmon and trout. The interwoven dynamics of water temperature, wind action, water clarity, and baitfish movement make it also one of the most challenging to fish. The rewards for skill and perseverance, however, are the opportunity to outsmart large numbers of lakers, browns, rainbows, coho and chinook salmon, even Atlantics.

I’ve learned over the years that increased boat traffic, combined with a major change in water clarity, have altered the playing field. Conditions can change almost daily, so a comprehensive game plan is a necessity. Unlike deep-water fishing (50 to 250 feet), fish in less than 50 feet of water can show a remarkable level of wariness, combined with indecisive feeding cycles. Anglers who master the shallow-water syndrome, though, will consistently catch fish all day.

On Lake Ontario, fishing can start in late March and extend to late June. Last year, a delayed spring warm-upkept salmon and trout in less than 20 feet of water from Port Dalhousie to Grimsby until mid-May. This area traditionally has the best spring fishing anywhere on the Great Lakes.

Thombs also has a simple, but effective, trolling spread for shallow water. On a large boat with a stand for mast boards, run a board on each side with two to four lengths of lead core at the terminal end. A second release can be used 20 to 30 feet inside the board with a snap weight or a shallow diver. The fifth line is a diver off the back of the boat and the sixth on a downrigger hugging bottom. A small boat can run two in-line boards, two divers, a long line with lead core, and downrigger a long line.

The most effective strategy is to swap out one line to match a productive line. Two hits on a diver should mean a shift away from a board to another diver. Likewise, catching a couple of chinooks off a downrigger at 30 feet should encourage using another downrigger setup.

Lake Huron
Georgian Bay is one of the hot spots for shallow-water tactics on Huron. Tony Degasperis operates Action Fishing Adventures and has a proven success rate for spooky trout and salmon. While fishing with him for lake trout and rainbows, he walked me through his techniques.

“On Georgian Bay, you can only use one rod per person, so you need to maximize your strategy,” he said. “Instead of being able to run eight rods for four people, you can only put out four rods in your spread.” Each rod has to follow a proven method of presentation.

Mast boards are used on either side of the boat. Twenty-pound mono runs from the reel out to the release near the board. A 2-ounce snap weight is attached 20 feet behind the board with a spoon running 300 feet behind and tracking 3 to 4 feet down. Even the most boat-shy trout or salmon will feel safe when the spoon passes by. Two to four colours of lead core can also be used behind the boards.

Inside the boards, slide divers can be placed at a 6½ setting, 50 feet out. The lure is set 100 feet back and will track 5 to 10 feet under the surface. To complete the spread, one or two Walker 107 Deeper Divers with a No. 3 setting are let out about 30 to 35 feet from the reel.

Shallow-water presentations need to feature a variety of different types of lures. Salmon and trout can exhibit different feeding modes and this means offering a full menu.Spoons are a first choice, but the spread needs to be complemented with bodybaits and flasher-fly combos.

Fish can hit spoons one day, but shift to crankbaits the next day. Optimize the number of lure options until the fish indicate a preference.If bodybaits are the favoured item, gradually start to include more of them in the spread.

Experimentation with different colour combinations is also a prerequisite to success. On any given day, find out what salmon and trout want, then give it to them.

Trolling speed and direction
The usual pattern is to troll with the wind, if mast boards are used. The tether lines will remain tight and the boards will move with a steady pull. Usually, a slow troll slightly over 2 mph with the wind, close to the shoreline, is the ideal first route.

Depth of water will usually be 20 feet or less. If fish are active, work back over the route in the opposite direction. Mark any knock-offs on a GPS for return reference.

Rainbows, browns, and lakers will frequent the shallow zone, but using electronics to identify fish location can be difficult. As the boat passes, fish move to the side and can’t be seen on the sonar screen. It will, however, show baitfish, indicating the presence of nearby salmon and trout.

“On Lake Ontario, after two or three passes through shallow water, loop out to 40 feet of water for chinooks,” said Thombs. “Kings are notorious for hugging bottom and you need to put the lure right on their nose.”

This is when a long lead off a downrigger ball scraping bottom can be effective. As the water warms in May on Lake Ontario, 2.2 to 2.7 mph is the recommended speed. Degasperis suggests 2.5 mph on Lake Huron and Brooks favours 2.8 mph on Lake Erie.

Seize the moment
The shallow-water fishery can be a time frame anywhere from two weeks to two months. Monitoring the weather and lake conditions on a daily basis are crucial. When a pattern of onshore winds, followed by a couple of calm days, are in the forecast, it’s time to get the boat ready.