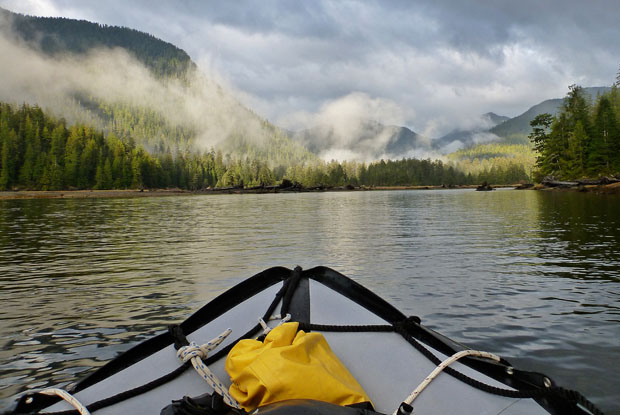 There’s a black bear on a shoulder of gravel 80 feet to my right.

It’s the third one I’ve seen today. I could almost drop a big, flashy, weighted fly on his nose. Or not! But I’m busy — waist deep in downhill water, with a fly in the jaw of an ocean-bright 14lb. coho. The Hayden reel is singing as the river bottom threatens to let go of my boots.

The salmon is duly landed and released and the bear ambles off upriver to do his own fishing, but not before I grab a one-handed photo, and the magical morning continues.

It’s like that on the wild west coast of Vancouver Island: if it’s not one thing, it’s another fully-engaging event. You have to love it.

In October, when the weather cools and rains mist the rugged coast, coho run up some small rivers just below remote Brooks Peninsula Park. Fly fishing for these chrome rockets is a life-altering experience.

But in October, when the weather cools and rains mist the rugged coast, coho run up some small rivers just below remote Brooks Peninsula Park. Fly fishing for these chrome rockets is a life-altering experience.

Rugged Point Lodge was home base when I joined five Western Canadian friends for my first crack at river coho. The lodge is owned and run by husband and wife team Matt and Kristy Guiguet and sits in the village of Kyuquot (pronounced Kie-YOU-cut), a First Nation community accessible only by water or air. 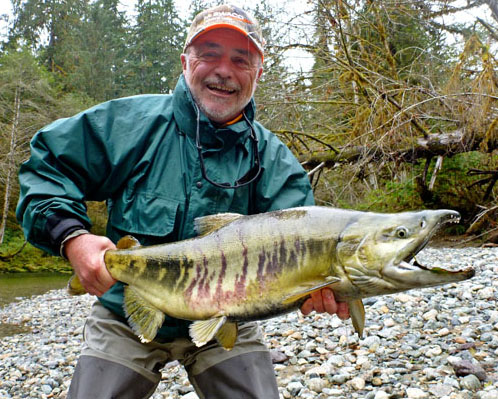 The lodge defines luxury-meets-coastal-wilderness and was newly built and opened in 2011, but Matt has worked and guided in the area for 15 years. The operation, he says, is a distillation of all he has learned and observed in his decades as a guide.

Deep roots
The Guiguets are real-deal islanders. Kristy was born in Kyuquot, and Matt was born and raised in the Oak Bay area of Victoria. He’s been guiding for 27 of his 47 years, including nine years of winter steelhead on the island’s legendary Gold River.

Matt’s grandfather Charlie Guiguet was famous in B.C. biological circles as a curator of birds and mammals at what is now the Royal Victoria Museum. Charlie was a friend and contemporary of author, judge, and conservationist Roderick Haig-Brown, who was for a time chancellor of the University of Victoria. “Haig-Brown,” says Matt, “liked to dance with my grandmother.”

“What I want,” Matt said, “is for clients’ expectations to be met.”

The lodge is among the most comfortable I have experienced. Six individual rooms are tastefully set up with twin beds for two anglers or a king-sized bed for couples. All rooms have their own bathrooms and adjoin the main lodge via a large common deck. An overhanging roof facilitates getting into the dining room without being soaked by the frequent fall drizzle.

The combined dining room and guest lounge is spacious and well-rounded, with Wi-Fi, a wood stove, fly-tying table, bar (which guests stock themselves), and a long dining table that would not be out of place in a good restaurant. The kitchen is visible, thoroughly modern, and gleams with stainless steel.

The Guiguets regard high-quality food as an essential lodge ingredient and I could not fault the menu. Main meals all have a seafood appetizer, wide range of entrees, and great desserts. Special dietary needs are no problem. Individual containers of homemade soup and substantial sandwiches marked our midday break on the river.

Adventures daily
Days at Rugged Point are dictated by the time of year guests visit. The season starts in May for offshore salmon, with halibut fishing running into late August, along with the recently explored “way offshore” tuna fishing. River fly-fishing runs mid-September until the end of October for groups of four to six anglers.

Our days began with a large hot breakfast, then it was into the Grady-Whites at the lodge dock for a run to the Tahsish River mouth to transfer to anchored Zodiac inflatables. Expect to see seals, sea otters, and perhaps sea lions en route.

What follows is an integral and exhilarating part of the outing, as the jet-powered Zodiacs ascend the river. We had three anglers and either Matt or guide Paul Vincent in each boat. While water levels are dictated by rainfall, and can go up and down fast, it is entirely possible to see schools of salmon on the way upstream. I also saw 12 black bears in four days.

You don’t need to be an expert fly caster here — the rivers are not huge — but if you’re new to a heavy sink-tip line there will be a short learning curve before the outfit feels right.

Coho on the fly in a river are a challenge. Bites can be violent or delicate. But, with coho well over 20 pounds, once the barbless hook bites, it’s always seriously game on.

Coho on the fly in a river are a challenge. Bites can be violent or delicate. But, with coho well over 20 pounds, once the barbless hook bites, it’s always seriously game on.

As an alternative to the Tahsish, I drifted the Kayouk River with Paul Vincent and two of the group. We rowed one-man inflatables on an exquisite, long day, taking coho and muscular chum salmon.

While this trip is about the fishing, scenery is world class. Perhaps my most enduring moment was laying my rod down and walking through the curtain of dense bush along the river into a rainforest wonderland that was both tropical in feel and quintessentially coastal B.C. in texture.

Fishing Kyuquot Sound is worth a spot on any angler’s hit list. ‘Unspoiled’ doesn’t always apply, but it does here.