Fly fishing and the Group of Seven 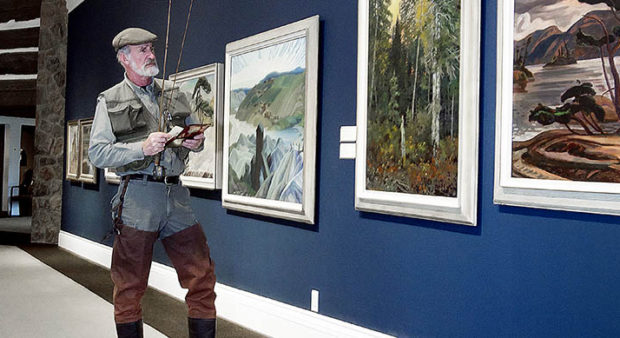 The paintings of the Group of Seven, led by J.E.H. MacDonald, Lawren Harris, and A.Y. Jackson, remain, close to 100 years later, icons of Canadian art culture. Although Tom Thomson was not an official member, since he died before the group’s first exhibition, he was, nevertheless, an important part of the group before it was named.

Thomson is the first of two intriguing connections between fly fishing and the Group of Seven. Notwithstanding his mysterious and untimely death at age 39 in Algonquin Provincial Park, he produced a large number of important paintings, including “Northern River,” “The Jack Pine,” and “The West Wind.” It also turns out, Thomson really liked to fish.

Even more interesting, Thomson appears to have been using the concept of matching the hatch, a process just emerging in North America at the time, which was going to have a profound influence on fly fishing and tying in the 20th century.

Born in Claremont in 1877, Thomson came by fishing honestly, since both his father and his paternal grandfather were avid anglers. He grew up around Leith, near Owen Sound, and was encouraged to spend time outdoors hunting and fishing as part of the treatment of a childhood illness. After moving to Seattle for a few years, he returned to Ontario and worked in Toronto, eventually joining the commercial-art firm Grip Limited, where he worked with several eventual Group of Seven members. He also spent time with his much older cousin, “Uncle” William Brodie.

Brodie, a famous naturalist, was particularly interested in the study of insects and helped found the Toronto Entomological Society in 1878. Thomson spent time outdoors with Brodie and learned how to collect specimens for study. These activities spurred Thomson’s love of the outdoors, and the entomology he learned from Brodie would stand him in good stead later when fly fishing in Algonquin.

In May of 1912, Thomson and another Grip employee, H.B. (Ben) Jackson, travelled to the park on their first visit. There, in the next five years, Thomson would produce the body of work that would make him Canada’s best-known artist. But, on that outing, Thomson came more to fish than to paint.

Various biographies contain references to his fly-fishing expertise. He “was a fly fisherman of exceptional skill” who “could cast his line in a perfect figure-eight and have the fly land on the water at the exact spot planned.” No one could “cast a fly with the ease and precision of Thomson.”

It is, however, in Audrey Saunders’ 1963 book, Algonquin Story, that we find the most interesting description of Thomson’s angling talent. “Tom’s skill at fly casting won him the admiration of the guests at Shannon’s…nothing delighted Tom more than to go out to a spot where everyone said it was impossible to catch anything, and to return triumphant with two or three good-sized fish. He made his own flies and ‘bugs,’ watching to see what insects made the fish rise and painting his own imitations on the spot.”

Matching the hatch
The reference to which insects made the fish rise, presumably so he could tie flies later to match what was hatching, is especially fascinating. It indicates Thomson was matching the hatch when the concept was in its infancy in North America. The origins of the concept go back to at least 1643, but it wasn’t until 1836 and British author Alfred Ronalds’ book, The Fly Fisher’s Entomology, that the idea of matching specific insects really took a firm hold.

Ronalds used scientific nomenclature to describe the insects that are important to fly anglers and, thus, firmly established the link between entomology and fly fishing. The hatches he described, however, were British. North American fly anglers had to wait almost 100 years, until 1935, when Preston Jennings published A Book of Trout Flies and provided anglers with a similar guide to North American hatches. Meanwhile, Thomson was matching the hatch in about 1915, a quarter-century ahead of Jennings’ book.

Paul Schullery, author of American Fly Fishing – A History, notes a problem with fly-fishing historians relying too much on the written word. He discusses how there might have been in North America many “mute inglorious Ronalds” who understood and used the link between entomology and fly fishing, but just never wrote about it. Thomson, especially because of the influence of his entomologist “Uncle,” appears to have been one of these “mute inglorious Ronalds.”

The other connection between fly fishing and the Group of Seven is more intriguing, because it’s possibly an even older example of an Ontario angler knowing and using the link between entomology and fly fishing.

The A.Y. Jackson connection
Alexander Young, who was Group of Seven artist A.Y. Jackson’s maternal grandfather, emigrated from Scotland in 1834 and settled on land bordering Mill Creek, a trout stream in Dumfries Township near Galt, now Cambridge. He was a keen hunter and fly angler, who tied his own flies and made his own rods, and was an early Canadian naturalist and entomologist, whose insect collection was eventually acquired by the Natural History Society of Montreal.

Imagining that Young, who died in 1881, wouldn’t have combined his interest in entomology with his interest in fly fishing is difficult. This would make him, like Thomson, but even earlier, another Ronalds, matching the hatch and catching more fish because of it. Regardless, Alexander Young’s legacy is secure, since A.Y. Jackson acknowledged that he inherited his love of nature, so central to his painting, from his fly fishing and entomologist grandfather.