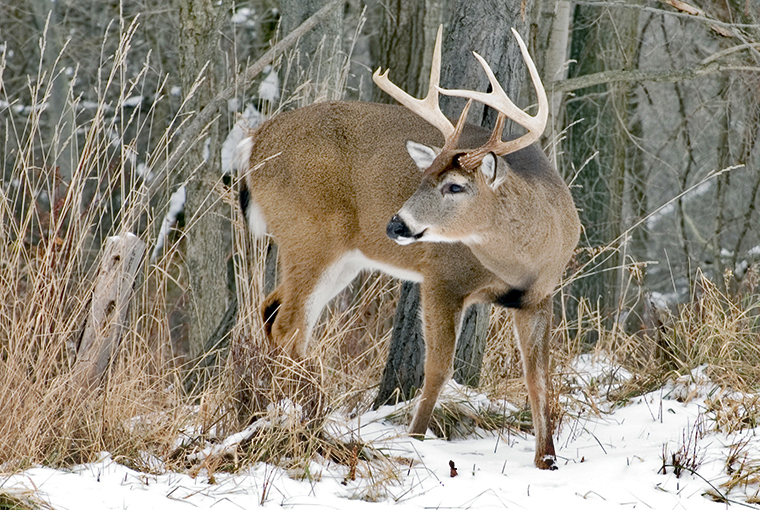 I was determined to get out on the last afternoon of deer season, despite a vicious winter storm that had been howling since the previous evening. High winds had done away with any thought I had of sitting in a tree stand, so I was trudging through a foot of fresh snow in search of a buck that was hunkered down and sheltering from the weather. It was nearing sunset, and after several hours of wandering the property, I’d seen only a doe and fawn bedded at the base of a small bluff. They hadn’t a clue that they were in my sights, even though I’d been within 20 yards. I already had meat in the freezer, and I was looking for a buck.

Snow Travel and Safety
Snow poses some real problems for hunters that can be as minor as getting home a bit later than expected, or as major as a life-threatening event. Preparation is the key to avoiding both.Make sure you and every member of your hunting party carry a survival kit. Must-haves are matches, a garbage bag, compass, extra flashlight, whistle, energy bar (or other high-energy snack), and a length of cord. With these items and your hunting knife, you should be able to get out of the bush by dark, or at least survive until help arrives.When the snow gets to about 18 inches deep, snowshoes start to make sense. New metal and plastic-based snowshoes are lightweight and handy, but they can be noisy. Traditional snowshoes are much quieter and better for moving around areas where moose are expected. Either will work for packing a trail for a snow machine or hauling moose out of tight spaces. After the first week of moose season, make sure you have some handy.It’s amazing how slick a bush road can become after just a few inches of snow, so slow down. You don’t want to hit the ditch 50 kilometres from the nearest blacktop or collide with a logging truck. Getting a vehicle stuck is another issue. A winch or come-along, shovels, rope, and a hi-lift jack are all recommended. A bag or two of sand is also worth having.Finally, make sure someone knows when you will be back. You don’t want to wait out the winter snowed in at moose camp or in the cab of your truck, no matter how much you love the country.

The King
I turned to start heading back toward the truck, which was now well over a mile away. The straightest path had me walking along a fencerow between two wide-open cut cornfields, directly into the clawing, tearing wind and snow. I shuffled along with my head down until I reached an intersecting fence that ran off to my left. As I looked up, I caught movement 200 yards away on the far side of the field, where a small wooded valley met the field edge. Deer were streaming out of the valley and breaking into a run diagonally across the cut field in front of me. There were 23 deer in all, but once I raised my binoculars, the tenth one in line had all my attention — it was The King.

That wasn’t my name for him, my hunting partner had coined it when he saw him for the first time. Four seasons earlier, I’d passed The King up as a 31⁄2-year-old 8-pointer with antler measurements grossing about 125. At the time, he was wide open and under 20 yards away and I was at full draw, but I decided to let him grow another season. I’d hunted him every year since and taken photos and videos, but never again had he been close enough for a shot.

All the deer headed to my side of the field, to a spot where the combine had spilled a bunch of corn during harvesting, at the end of the intersecting fenceline I’d just reached. Here was my chance. Staying low, I moved along the fencerow on the opposite side of the deer. The cover was sparse and grew lighter the farther I went. Soon, I was crawling through the snow on all fours, then ran completely out of cover as I reached a lone maple. The closest deer was 45 yards away and, unbelievably, it was the big buck I was after.

Hiding behind the maple, I got ready for a shot, but 45 yards was much too far in this wind. The deer all milled around, digging for corn as the light began to fade away. Two does had moved to about 30 yards from me. The King was looking their way and started to move towards them. The does passed me about 25 yards out, with the buck right in their tracks. I slowly began to raise my bow — and had a crazy thought that I was going to have to get him out by myself because nobody would come out in this weather to help me, and on New Year’s Eve, no less. One of the does was looking at me, then the other. The first one turned and began to trot back toward the valley and was soon followed by the second. The King never even glanced in my direction, but casually began to trot after them. He was at 25 yards, then 40, then 60. There were other bucks in the group, but I wasn’t interested. I dropped my bow in the snow, sat beside it, and flopped onto my back. He’d done it again, confirming for the hundredth time the name that I’d given him the first time I’d laid eyes on him — Lucky Buck.

I saw him twice more in seasons following that close encounter, but never had another chance at a shot. I did find his sheds the following spring, a very symmetrical 8-pointer scoring 168 with about a 24-inch inside spread. The King, indeed.

When Weather Turns Cold
I love hunting the late season, especially when there’s a good amount of snow on the ground. It really concentrates deer activity. By the time mid-December rolls around, deer are motivated by only two things: shelter and sustenance. Lateseason food sources are limited and can be much easier to pinpoint than during early or mid-season, when food is plentiful. If you know where deer are bedding, it can almost feel like you’re cheating, because tracking their movements is easy. This makes them much more predictable than at any other time of the year.

Generally speaking, late-season deer will congregate in areas with good food sources and shelter and abandon areas that don’t offer adequate amounts of either. Even in southern Ontario, where deer don’t typically yard in the traditional sense, they will move out of poor-quality areas in favour of better ones.

What to Look For
Available food, such as standing corn or cut corn fields attracts deer. This is especially true if farmers use older, less efficient equipment that misses a lot of grain. Corn is a favourite winter food as it’s high in carbohydrates. White cedar can also be important.

I’ve seen deer browsing cedar at all times of the year, but in the winter it can become the main staple. Look for heavy browse-lines on cedars. I’ve also seen staghorn sumach stripped of bark from the ground to 6 feet high. Deer will dig in the snow for apples, pears, acorns, or whatever else is left on the ground. In the north, lichens can provide winter food.

The best food source in the world will not attract deer without adequate shelter nearby. Shelter means protection from the weather, as well as security from predators. Deer are at the mercy of the elements every day of the year, they don’t take cover in dens or caves, and they don’t build nests. The best they can do for themselves is to seek out thick stands of dark growth in low-lying, protected areas. Cedar not only offers protection from the wind, it also provides thermal cover. That is, it’s usually a little warmer under the thick canopy due to the stillness of the air, combined with some retained warmth from reflected sunlight and body heat from deer.

Low swampy areas can also be a few degrees warmer due to the heat produced by rotting vegetation. The canopy reduces the amount of snow that reaches the ground, making it easier for deer to move around. The more snow there is on the ground, the closer together the food and the shelter need to be. It’s all about energy expended versus calories acquired.

Be aware of south-facing hillsides or bluffs that can be sun traps on a bright winter’s day. If there’s protection from the wind, deer will bed on the hillside or at the bottom of the bluff, and soak up the sun all day long.

Connecting the Dots
If deer are moving between food and shelter, note how they are getting from one to the other, and decide where on that route you will be sitting when the old man of the herd walks by. With snow on the ground, it’s pretty easy to see the regular travel routes, but keep in mind that deer can be active at night. No amount of tracks will guarantee that you will see deer during shooting light. If deer are passing your location outside of legal-shooting hours, you need to move closer to their destination. As always, avoid getting too close — you don’t want deer to see, hear, or scent you, either on your way to or from the stand. Make sure today’s hunt will not adversely affect your next hunt on the same property.

Now’s also the time to start planning for next year. Store away all the information you gather this fall for future use. Unless the food source or shelter changes, one late season is much like the next as far as deer location and activity are concerned. Consider keeping a hunting log for those little gems of insight that are otherwise soon forgotten. Finally, the best time to scout for next year begins the day this season closes. It is easier to spot travel routes, rub lines, and areas where deer are feeding and bedding when there’s snow on the ground.

Yes, the late season can be cold, windy, and miserable. But, it can also be worth every wretched second.