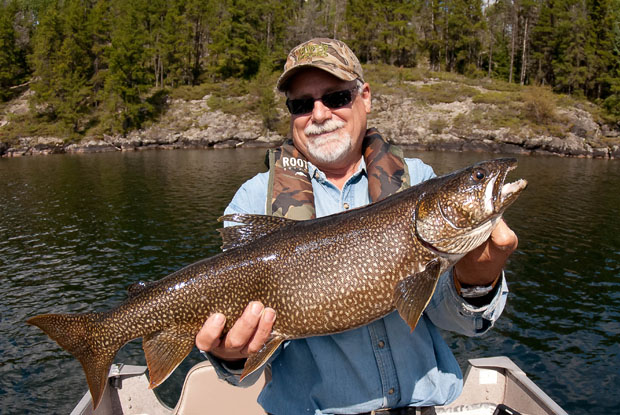 By late summer, lake waters have begun to cool. In deep lakes with lake trout, surface water temperatures have often dropped enough to allow trout to make brief forays up from their summer home in the icy depths to feed.

Along with dropping temperatures, the angle of the sun is noticeably lower than during the height of summer. Certainly, there are still bright days, but the sun’s rays feel less intense, and the sky and air have a distinct autumn feel. Even the sky looks bluer. It’s a different light that penetrates into the depths of the lake.

For anglers looking to cash in on late-summer lakers and other game fish such as muskie, there are tactics that exploit both cooler waters and changing light conditions. Often, the ticket to success is to troll or jig with heavy metal offerings that provide plenty of flash.

For anglers looking to cash in on late-summer lakers and other game fish such as muskie, there are tactics that exploit both cooler waters and changing light conditions.

To help locate fish, watch for flocks of gulls and terns flying and diving over open stretches of water – a sure sign they are actively feeding near the surface. Almost assuredly, they’re after schools of shiners or herring, and more than likely the baitfish are being pushed towards the surface as they try to escape the jaws of hungry trout. 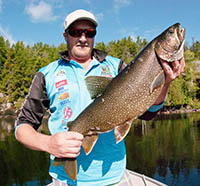 Get your boat to where the birds are, keeping an eye on your fish finder. Clouds of baitfish are easy to see on the screen. Long arcs are more than likely trout, but sometimes few are seen because when the fish are active and near the surface, they can be spooked by the boat.

Under such a scenario, active fish are suspended, and are not necessarily associated with any sort of bottom structure.

Try long lining
Downriggers set at a depth and dragging flutter spoons, Williams Whitefish, or any other long, thin, flashy spoon can work.  Set them to just below where the baitfish are marking, usually no more than 30 feet. You can also try long lining with the aid of a sinker.

Alternatively, use lead core or wire line to achieve the depths you want. Or simply cast heavy spoons like Little Cleos or Gibbs Crocodiles and let them sink before retrieving with a somewhat erratic, stop and go motion. Always keep at least a bit of tension on the line, as most hits will occur as the bait falls.

A couple of years ago, on a bright, calm, early-fall day, an Aussie friend and I were trolling with wire line in deep water off a rocky point when we noticed baitfish jumping and splashing in waters mere feet from shore.

I suggested we move in close to the minnows and jig up whatever was obviously chasing them. It was a steep drop-off so we switched to baitcasters spooled with mono and attached one-ounce Cicadas, a heavy metal blade bait that vibrates on the retrieve and flutters on the fall.

Splash and jump
We decided to backtroll, keeping the Cicadas 10 or more feet off bottom and snapping them vigorously to provide plenty of action. Around us, baitfish continued to splash and jump.

Within minutes, I had a solid strike and after a hard-fought battle, landed a beautiful laker that easily topped 10 pounds.

After releasing that fish, it wasn’t long before I had another hit. It felt just as big as the first, but to our surprise, that fish wasn’t another laker, it was a gorgeous tiger muskie.

It’s hard to beat chasing lakers, pike and muskie in the great outdoors in early autumn. Success can be as simple as shimmering spoons and sunshine.