9 ways to put more steelhead on the bank 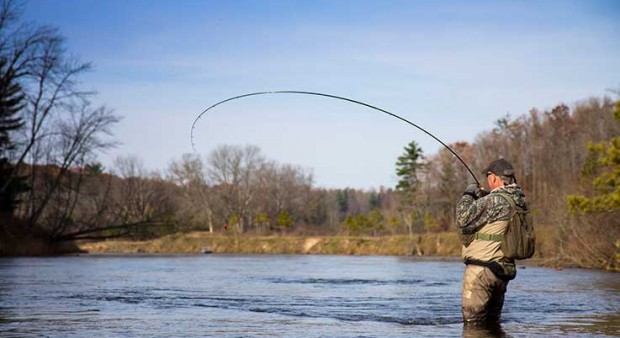 Steelhead fishing is a pretty simple game. They’re by nature an easy fish to catch. Success or failure almost always hinges on timing and the rise or fall of rainwater or snowmelt. When conditions are prime, everyone catches fish. When they aren’t, well, that’s a different story.

The most consistently successful steelhead anglers I know are also the most versatile. They don’t blindly stick to one method that’s worked in the past.

These 10 tactics might be old news to some, but if you glean even one new thought or idea, then you’ll have become a more versatile angler. 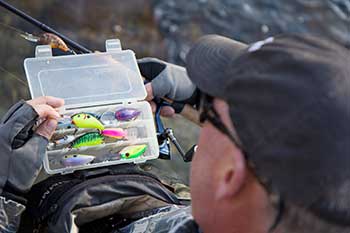 1. Bass cranks
Standing in my local tackle shop a number of years back, I had an epiphany. On the wall in front of me were row upon row of small compact bass-style crankbaits in a dizzying array of colours. Long a proponent of tossing hardware for steelhead, I thought why not? Most of these baits run shallow and are perfectly suited for use in a river environment. More importantly, they’re something new and different that fish rarely see. The following week saw me struggling to catch fish and, having exhausted my usual tactics, I figured now was as good a time as any. I clipped on a crankbait and fired out a long cast. Unprepared, I almost fell off the rock when 2 10-pound class fish rushed in right at my feet, chasing the lure. One smashed it violently.

Having proven to be lethal, crankbaits now have a regular place in my arsenal.

Brighter fluorescent colours work well in off-coloured water. When the water is clear, use muted patterns.

Brighter fluorescent colours work well in off-coloured water. When the water is clear, use muted patterns. The only negative aspect of these lures is the hooks; designed with bass in mind, they’re too small and too soft. Swap out the stock trebles with a stronger, slightly larger version and you’re good to go.

2. Minnows
Having the opportunity to travel and fish all over the Great Lakes for steelhead, I find the unique tactics encountered in each region fascinating. The U.S. south shore of Lake Erie, affectionately known as Steelhead Alley, is booming with steelhead runs. Many of the local anglers are new to the sport and have no preconceived notions when it comes to steelhead. They’ll use virtually anything — oftentimes with success. Astonishing to me was the number of anglers toting bait buckets and live minnows, something you never see in Ontario.

Fished under a float, shiners are deadly effective, and why wouldn’t they be? Baitfish comprise a large portion of a steelhead’s diet in open water and that doesn’t change when they enter a river. They’re in my bag of tricks here in Ontario and in certain situations, such as around piers and estuaries, they will outfish anything. 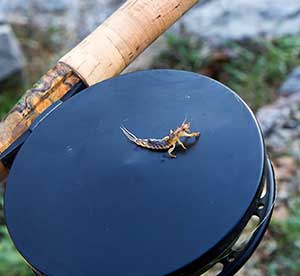 3. Live nymphs
As a young boy in the 1970s, an ultralight rod and reel and bait box full of worms were my weapons of choice. When worms were scarce, I’d spend half an hour turning over rocks in the stream nabbing all manner of creepy crawlies: stonefly and mayfly nymphs, hellgrammites, caddis pupae in their tiny casing of sticks, and even crayfish. They all worked.

Mayfly nymphs can also be locally harvested easily. They burrow into the mud and silt of most ponds and lakes. Using a shovel and window screen to sift them out of the muck, you can unearth dozens in short order. In clear water, when the fish are neutral or negatively active, a live wiggler fished under a float on a light-wire hook is deadly.

4. The night shift
Many of us live in busy, urban environments and rivers crowded with anglers have become a fact of life. Even so, those same rivers become virtual ghost towns at night. The bonus: steelhead lose much of their natural wariness under the cover of darkness. The key to success is to search out slower water close to the lake. There will always be a few fresh fish poking their nose in for a sniff, and sometimes more than a few.

Scent is critical, so drifting roe (the gooier and smellier, the better) under a lit bobber is effective.

Scent is critical, so drifting roe (the gooier and smellier, the better) under a lit bobber is effective.

Vibration is key, too, when targeting sight-impaired steelhead. Simply casting and slowly retrieving erratic banana-style baits, such as Kwikfish and Flatfish will elicit arm-wrenching strikes.

Steelhead rivers can be dangerous wading anytime. At night, take extra care and fish with a buddy. 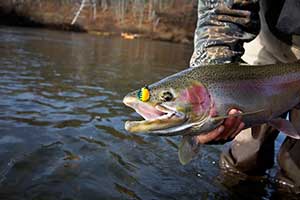 5. Spinner rigs
Being a steelhead angler, and one who likes to experiment, incorporating walleye blades was a natural. The obvious application was building heavy-bodied spinners suitable for casting. These spinners work well, but there’s another application that’s even more interesting.

Run under a float, the smaller, almost weightless, Colorado style blades act as attractors. Small, quick-change clevises are handy, allowing you to easily change blades on a whim. I’ll run the clevis and blade directly on my tippet and then use a tiny neoprene bobber stop to peg them 2 inches above my hook. In more intimate flows, I’ll stick with smaller, more subtle No. 1 and 2 blades in hammered brass and silver.

In larger flows, bigger brighter blades shine. Position yourself above the intended target, cast across, then hold back on the float slightly. This allows the current to work its magic, slowly turning the ultra-light blade. Word to the wise, maintain a good grip. On a tight line, the hits are ferocious. 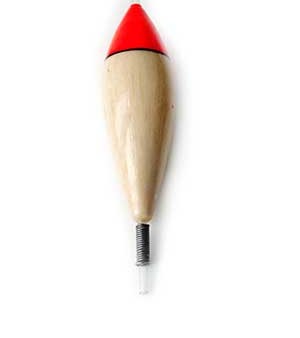 6. Self-cocking floats
If you fish long enough, sooner or later you’ll encounter a situation that has you stumped. Years back while walking a favourite river, I crested a hill and spooked an enormous school of steelhead in the pool below. Hunkering down behind some cover I watched. As many as 50 trout were packed in a tight group a foot under the surface.

Everything I tried sent them into a panic. Digging into my vest, I pulled out a tiny British-made float with a weighted stem. Hastily re-rigging, I ran a 2-foot section of light tippet straight from the float to a small hook and a single egg. With the float being weighted, no split-shot was required.

I managed to land 3 nice fish before my brief flurry of action ended. Since then, self-cocking or weighted floats have had a permanent place in my vest. In clear water, especially in estuary situations, it’s perhaps the ultimate finesse rig.

I make my own weighted floats by wrapping a short piece of soft leadcore around the stem of any float, then applying epoxy. It’s a good idea to test them in the laundry sink at home first to determine precisely how much lead is required. They are a worthwhile addition to your float-fishing bag of tricks and a stealthy option when the fish are finicky. 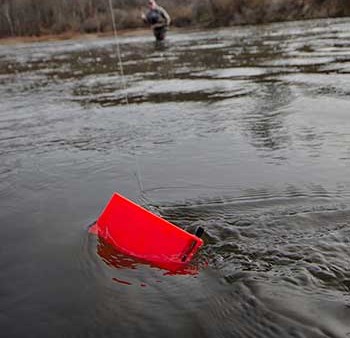 7. Planer boards
Standing knee deep in the wide, meandering river, I was frustrated. Far out in the middle, way beyond my reach, was a seam with steelhead constantly porpoising. Farther downstream, within sight, a drift boat was anchored. Rods out to the side, they were dropping back plugs to the waiting fish. It seemed as though every time I looked up they had a fish on.

A light bulb suddenly went on. A small in-line planer board might just work to reach that faraway seam, and hold a wobbling lure in front of the fish. The following spring, I put my theory to test. Attaching a small in-line planer board to my line, I ran a 4-foot lead below it and clipped on a small chrome and blue Hotshot. I swam the little board out to a fish-holding seam and simply held it in place, allowing the current to enticingly work the plug.

Within a minute, the water erupted behind my board as a steelhead smashed my lure. I’ll admit to feeling just a little smug.

This is the most off-the-wall tactic I’ve ever tried, and I can tell you that I got a lot of stares and even a few chuckles from other anglers. Their demeanour tends to change pretty quickly, though, when I hook a fish. It’s definitely not something I do every day, but it has its time and place.

8. Micro banana baits fished under floats
Years back on the Saugeen River, I had scratched out a few fish, but all around me anglers throwing hardware were hammering fish. Lamenting the fact I hadn’t brought my spinning rod, I dug through my bag and unearthed a small box of banana baits. A tiny 2-inch skunk Flatfish caught my eye and I tied it on below my float. These baits are buoyant, so I bulked up my shot adding a substantial clump just above my short tippet.

Extra weight was required to sink the lure quickly in the swift current. Casting across and allowing the float to drift below me, I held back on it, causing the tiny bait to wobble frantically. On my first cast, a fish hit so violently it almost took my breath away. Several more soon followed and a new tactic was born.

Beyond trotting the float and utilizing a bulk shot pattern, it’s a good idea to bump up your tippet to at least 8- or even 10-pound test. Steelhead smash these tiny offerings with a fury.

9. Soft-plastic swimbaits
Over the last number of years, soft plastics have proven their worth. Pink worms, micro tube jigs, and egg imitations all have their place and work well. Often forgotten, however, are soft-plastic minnows. On certain rivers, most notably the Niagara, minnow baits excel.

Hiking into the Niagara gorge one glorious autumn day I had that point driven home, as anglers all around me hit fish after fish on plastic minnows. No surprise though, as there’s so many baitfish in the lower river. At times, it’s all the fish will key on. Rigged on a jig head and drifted under a float, 3- to 5-inch plastic minnows are lethal.

I’d been using these baits for a number of years, but hadn’t really cast them much for steelhead. An oversight on my part.

However, my initial attempts at casting them for steelhead proved dismal, until I made one minor but significant switch. Paddle tail versions are much more effective when retrieved — offering a more pronounced thump and wiggle than the streamlined baits. It was like flipping a switch. Rigged on a light darter head and retrieved slowly, they proved potent.

Sometimes an erratic stop-and-go approach works wonders, hopping it back in short bounces. From day to day you never know precisely what will trigger a strike. Soft plastics are a versatile bait that trout seem to love.

A version of this article was first published in the 2014 Ontario OUT OF DOORS Fishing Annual. Subscribe.