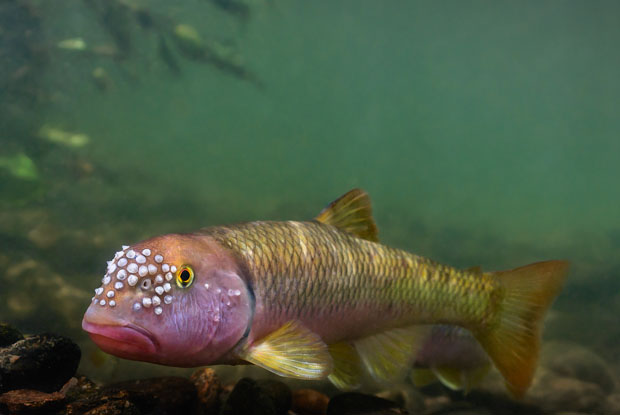 Of the Canadian provinces, Ontario has the greatest diversity of freshwater fish, according to The ROM Field Guide to Freshwater Fishes of Ontario.

Within these 145 native and introduced species lurk some fascinating facts. From the quirky to the hard-to-believe, the following are a few tidbits and did-you-knows sure to provide fodder the next time you need to strike-up a conversation with a fellow fish-head.

1. It could be worse, you could be a perch
In addition to being food for many predator fish, more yellow perch are commercially caught than any other wild fish in Ontario. They also have the highest landed value ($), which is the value garnered for fish the day they’re offloaded from a vessel.

2. Prehistoric fishing gear – not the stuff in your great uncle’s Jon boat
The oldest fish hooks go back roughly 42,000 years. The hooks were found in a cave in East Timor, a long way from Ontario, and were made from bone.

3. Growing faster than ever
Muskellunge in the St. Lawrence River are growing faster and bigger than ever before. And it isn’t just climate change that’s producing more optimum temperatures and large, softrayed prey. Another major factor is linked to the survivors of the viral hemorrhagic septicemia (VHS) die-off from 2005 to 2008. This wiped out 50% of the spawning population, selectively killing off old, slow-growing individuals. What remains is a significantly faster-growing stock of survivors, 10% faster, according to John Casselman, adjunct professor, Queen’s University.

4. Pucker up
Fish scales are sometimes used in lipstick. Seriously.

5. Sticklers for spawning
Ontario is home to four of seven of the world’s sticklebacks. Reproduction rituals vary, but male sticklebacks are a curious lot when it comes to spawning. He builds a nest out of leaves, grass, and twigs, and binds them together with a sticky secretion. The nest may be cupped, rounded, or tunnel shaped. The male then pimps out his pad with dancing moves, which may include nips and nudges to direct a female into the nest. After the female releases eggs, he chases her away, then fertilizes the eggs and guards the eggs, and young.

6. Adipose fin scandal revealed!
While it’s often a feather, err fin, in their caps, trout aren’t the only ones with an adipose fin. This fin, located on the back and ahead of the tail, is also found on catfish, rainbow smelt, lake whitefish, and ciscoes.

7. Its what is where?
Found in southern Lake Erie and Lake Ontario regions, and in out-of-province waters, the pirate perch has a unique aging process. All is hunky-dory for juveniles, but as a pirate perch matures and grows, its anus shifts head-wards, eventually stopping at the throat.

8. Tag, you’re it
Did you know that scientists are studying fish movements using electronic tags roughly the size of a grain of rice? There are also underwater telemetry receivers tracking fish in Canada’s three oceans, as well as the Laurentian Great Lakes. Canadian scientists and industries have been front and centre in electronic tagging advancements over the last decade.

9. A rolling good time
Although burbot spawn below the ice in winter, the act’s a busy one. Under the cover of night, the sexes converge in a ball of 10 to 12 fish, moving across bottom on gravel shoals and sandy bays. Fertilized eggs are left where they fall as the ball rolls on.

10. Taste test
Odds are a catfish would pass a cola challenge with flying colours. Catfish have over 27,000 taste buds, many covering their body. Humans have somewhere between 7,000 to 9,000.

11. Sneaky blues
Bluegill “parental” males are a traditional lot. They build a nest and court a female for spawning. Other ‘gill dudes take different approaches. “Sneakers” are small males that linger around a nest. When spawning begins between the parental male and a female, the sneaker jumps in on the action, releasing sperm to try and fertilize eggs. “Satellite” males have another method. They mimic the look and behaviour of females, and swim into the nest and release sperm when the parental male and female spawn.

12. We’re from the Valley, eh!
Did you know that the rainbow smelt’s distribution within Ontario was originally confined to a handful of lakes in the Ottawa Valley? Now, their distribution is vast, thanks to bait-bucket dumping, among other things. Ontario’s Invading Species Awareness Program considers them an invasive fish.

13. Air-breathing ancients
Did you know that longnose gar, spotted gar, and bowfin are able to breathe air taken from the water’s surface? The air moves to the swim bladder where the oxygen is then drawn-in. This trait enables these fish to survive in warm, shallow water with poor oxygen levels.

14. One fish, two fish, brown fish, new fish
Several species of fish were introduced in North America in the 1800s. One of the first brought to Ontario was the Brown Trout, originally from Europe. The Common Carp was also introduced in the 19th century. The carp holds the title of first invasive fish, given their destruction of aquatic plants and habitat.

15. Lots of rainbows
Rainbow trout, rainbow smelt, and rainbow darter all swim in Ontario’s waters. Of the three, the darter is perhaps the one with the most vibrant paint job.

16. Nice ear earrings
The ear bones (otoliths) of freshwater drum have a tendency to wash up on shore and can take on a polished, ivory-like appearance. As a result, they’ve been used for currency, kept as “lucky stones,” and are still used for making jewelry.

17. Ineligible for OHIP
The American shad only briefly visits Ontario to spawn, swimming to the Ottawa River’s Carillon Dam. Once reproduction wraps up, adults return to the ocean. Offspring wait for fall to make the trek.

18. Most birthdays
Lake sturgeon have the potential to live the longest out of all of Ontario’s fish. On average, males live 55 years, females 80. However, there are cases of sturgeon close to 155 years old in Ontario.

19. Bumpy nuptials
Many male minnows grow hard bumps or small spikes on their heads and parts of their bodies come spawning time. These “nuptial tubercles” have varying uses, from making and defending nests to stimulating mates. The hornyhead chub’s moniker refers to its spiky nuptial tubercles.

20. Not this season, honey
Some fish, such as smallmouth bass, may take a year or two hiatus from spawning. Reproduction is energy-costly and some fish take a break to recharge, according to Steven Cooke, a professor at Carleton University and principal investigator at the school’s Fish Ecology and Conservation Physiology Laboratory.

21. Try the fish… or maybe not
Did you know that seafood, which includes freshwater fish, is a common food allergen for many Canucks? Reduce your risk by sending fresh walleye fillets to Editor/Associate Publisher, Ray Blades, P.O. Box….

Sources: Many of these facts were taken from the comprehensive and picture-rich, The ROM Field Guide Freshwater Fishes of Ontario.

This article originally appeared in the Ontario OUT of DOORS 2015 Fishing Annual. To see more stories like this, subscribe to OOD today.