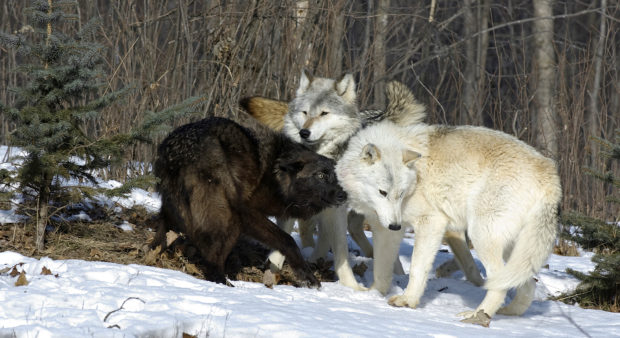 Within and outside the hunting community, wolves continue to be controversial. Everyone has an opinion about them. Some hold them in reverence over any other bird or animal, others despise the beasts. Although the vast majority of hunters these days have an appreciation for wolves, finding consensus is still difficult. Like I said, everyone has an opinion.

Until recently, one could hunt and shoot wolves in Ontario simply under the authority of a small-game licence. The prevailing view was that wolves were relatively abundant in the province, with few perceived threats. More to the south, wolves, “brush wolves,” and coyotes were viewed as major predators of other wildlife, as well as livestock. Here, they’ve long been viewed as vermin to be disposed of whenever the occasion arises.

Over time, the clamour from environmentalists, scientists, and the general public to provide wolves with more protection has grown. Hard to ignore is the fact that wolves – not withstanding the now almost ubiquitous abundance of coyotes – have been exterminated over much of the lower 48 U.S. states and large swaths of southern Canada. For many people, wolves are symbolic of true wilderness. No doubt, things needed to be done.

A Long-Standing Hatred
Much of the deep-seated attitude that exists towards wolves, including the fear and hatred, can be traced to our European heritage. In early Eurasia, there’s evidence wolves were wreaking havoc on livestock and even people. Little wonder that the rural peasantry were scared of and loathed wolves.

Tales of evil doing by wolves, including by mythical werewolves, became common folklore. Early immigrants carried these attitudes across the pond and they remain a part of us.

There’s no doubt, though, that we’ve softened our stance toward wolves, based on better knowledge. Top predators like wolves are largely accepted as an important part of the ecosystem.

They can help keep prey populations in check and weed out weak, sick, and diseased individuals. Although there’s no proof, I believe a healthy wolf population might be a key in the fight against chronic wasting disease.

Sick deer don’t last long when there are wolves around, so an infectious disease like CWD might not have the time it needs to spread. At least it won’t spread quickly.

Still, keeping a clear head when coming across a young cow, sheep, or a deer ripped to shreds by a pack of wolves is hard. And, rural landowners who have lost a pet to marauding wolves or their smaller kin, the coyote, also likely don’t have a lot of empathy for wild canids.

A Shift of Values
To address concerns about wolves, the government altered its wolf management regime in Ontario a few years ago with the introduction of wolf seals, seasonal bag limits, an end to party hunting, and mandatory reporting. There are exceptions. In southern Ontario (specifically Wildlife Management Units 43 to 45 and 59 to 95, units outside of the core wolf range, but where coyotes are common), all you need is your small-game permit to hunt wolves and coyotes. There are no seals, no bag limits, no mandatory reporting, and no restrictions on party hunting.

There is, however, a large number of townships in and around Algonquin Provincial Park where there’s no wolf or coyote season whatsoever. This is to protect the eastern wolf (Canis lycaon), only recognized a few years ago as a separate species and now listed as Special Concern under species-at-risk legislation. It’s slightly smaller than the more familiar grey or timber wolf (Canis lupus) and more adapted to killing deer. DNA evidence has shown grey wolves and eastern wolves – and perhaps coyotes – interbreed and produce viable offspring (some refer to the wolf family as “Canis soup”), which is a headache for taxonomists and others who study and manage wolves.

Overall, the regulatory changes, at first glance, suggest that wolves, at least in most of northern Ontario, are pretty much managed like a biggame species. But, there are major differences.

For one, Ontario classifies the wolf and coyote as furbearing mammals, and as such hunting of them and the issuance of wolf seals occurs under the auspices of a small-game licence. Because of this, you can’t hunt wolves with a rifle of greater calibre than a rim-fire .22 (or with shot larger than lead No. 2, BBB steel, or BB bismuth) where there’s an open gun season for deer, moose, or bear, unless you have a valid licence for one or more of those species. Your licence is considered valid only if you or someone in your hunting party have an unused seal. So, if you only bought a moose licence and used your seal to tag a moose, you can’t go out wolf hunting by yourself if the moose season is still open, at least not with an appropriate firearm. Wolf hunters prefer rifles, and there’s general agreement a .243 is at the lower end of what’s appropriate.

Unlike wolves, moose, deer, and bear are classified as big-game and each has its own licensing requirement (bears are co-classified as a furbearer). Smallgame mammals, including wolves, are managed using the small-game licence.

Still Controversial
Regulations, though, are only a part of the story. Whether one views the wolf as big game or vermin or something else is really a matter of personal opinion. Depending on whom you hang with or where you live, prevailing views on wolves can differ.

For example, there might be “too many” wolves where you hunt deer, and the local farmers might all agree. Of course, “too many'” or “too few” is seldom based simply on data. Many of us think having wolves on the landscape is nice, but none of us want them running around our schoolyards. This still leaves lots of room to quibble.

A recent development is our new softer attitude towards wolves is a factor in an apparent change in wolf behaviour. They seem to be less afraid of people. Another contributing factor might be a result of those of us who live in or near the woods and don’t shoot at every wolf we see, which used to be the more common approach.

I think many hunters today buy a wolf licence just to be legal. Few hunters spend much time specifically hunting wolves, but would take one incidental to a big-game hunt. Wolves are smart, cagey, and tough to hunt. Still, targeted wolf hunts, usually over bait, are gaining in popularity.

As a hunter, I know sharing our deer and moose with wolves and bears, especially when there’s “too many” of them, can be difficult. But, in the scheme of things, that’s a small price to pay, mostly because I know having truly wild places, where wolves can howl and hunt and roam at will, is much better than having no wolves at all. Wolves might not be big game, but they certainly aren’t vermin, either.