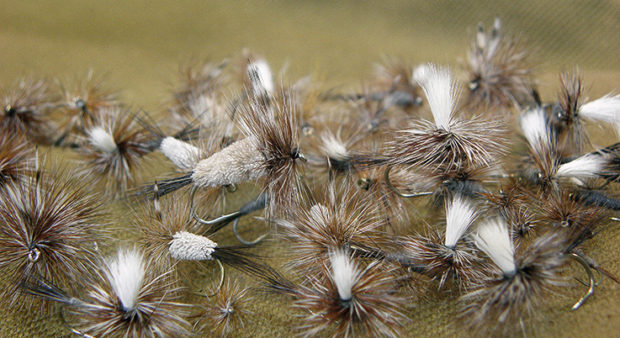 The Adams dry fly is a versatile, impressionistic fish fooler with a legendary reputation. It’s considered to be the single most popular dry fly around the world. But, despite the popularity and effectiveness of the original pattern, in a testament to human nature’s desire to improve, many variations of the original pattern have been developed, to the point where there’s a big family of Adams flies.

The original
The Adams dry fly was invented by Leonard Halladay of Mayfield, Michigan, in 1922. Charles F. Adams, an Ohio attorney, was the first to use it when he fished the Boardman River in Michigan. There are a few different versions of the fly’s genesis.

One has Adams describing an insect to Halladay that he’d seen while fishing, which Halladay then tied a copy of. In any event, Adams fished Halladay’s creation the next day and reported to him that the fly was good. Pleased with the compliment, and perhaps in acknowledgement of the collaboration, Halladay named the fly the Adams.

Hackle: One grizzly and one reddish brown wound at the throat

Gradually, the fly evolved into the current version, where the tail consists of hackle-feather filaments from the same hackle wound at the throat, a mixture of grizzly and reddish brown. The grey wool body is now grey muskrat fur, and the grizzly hackle-tip wings are now upright and divided.

The Adams is effective for imitating a wide array of insects, mostly mayflies. But, in a pinch, it can also be used to mimic caddisflies and craneflies. It doesn’t look exactly like any particular insect, but enough like many of them that fish are frequently prepared to attack it with gusto.

It has the general shape of a mayfly, and since trout frequently see hatching mayflies silhouetted against a bright sky or in low-light conditions, towards dusk, the dark body often works even if the natural’s is lighter. The grizzly hackle-tip wings, with their black mottling, are a good imitation of several important mayfly hatches on Ontario waters, including the grey fox, green drake, and big slate drake.

Modifications
Variations of the Adams are numerous. Even Halladay was responsible for at least one form of a female Adams tied with a dubbed yellow fur egg sac at the rear of the body. Two other variations are illustrated. The first is yellow bodied, for a more accurate imitation of yellow-bodied mayflies. These include the grey fox and green drake again, but also the sulphur mayfly family.

The second variation shown is an Adams wet fly, tied on a wet-fly hook, with wings in a down position and longer, sparser, softer hackle at the throat, tied to sweep towards the rear. This is a good imitation of a wide variety of sub-surface trout food and can also imitate an emerging mayfly.

Too many to choose
When it comes to variations, those are only the tip of the iceberg. There are parachute-styles, some tied upside down so the bend of the hook doesn’t penetrate the water’s surface, and others tied with moose-hair tails, which present a different silhouette to fish. Hair-wing versions are particularly popular in the west.

Some tie the fly backwards on the hook, on the theory that most mayfly naturals float downstream head first and are usually taken this way by trout.

There’s an Adams irresistible pattern, where the body consists of spun deer hair clipped to shape, rather than muskrat-fur dubbing. In a thorax version, the wing is moved farther back along the shaft of the hook, to achieve a better balanced fly when floating on the surface. There’s also a soft-hackle version without a wing and incorporating natural and dyed brown Hungarian partridge hackle feathers.

Likely, more versions will be developed. The Adams’ components simply make it a fishy-looking fly. I’m looking forward to someone coming up with Uncle Fester, Morticia, Lurch, or Thing versions that will add to the growing Ad(d)ams family of flies.