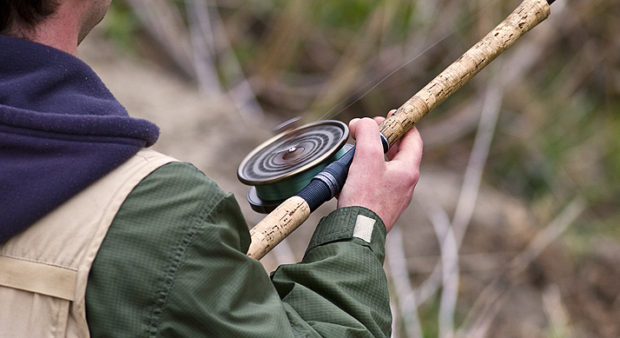 Having spent more than 40 years pursuing Ontario steelhead and brown trout in rivers, I’ve seen a lot of tackle changes. The first time I saw a centrepin, I thought it was a fly reel. Only when I watched the angler’s method of casting a float did I realize it was different.

The angler told me he’d moved recently from England, where he’d primarily used his centrepin for carp fishing. As a neophyte steelheader, he was simply experimenting with a familiar reel. Little did he know he was at the forefront of change here, using equipment that has roots well back in history.

The person was Paul Almanza, operations manager of Anglers International, distributors of Raven and Drennan steelhead products. “In Europe and the British Isles, centrepins were widely used in the mid-1800s and were called Nottingham reels,” he said. “They were simply a spool on which line could be stored. Over time, centrepins developed a following and were utilized for a variety of fishing in lakes and rivers.

“The introduction of spinning reels to North America after World War II was a major setback to the centrepin,” he continued. “Spinning reels were easy to use and could be utilized for trolling, casting, and live-bait fishing.”

In the late 1970s, Ontario steelheaders started to upgrade to high-quality spinning reels with reliable drags. They were matched to 9- to 10-foot drift rods, which had advantages over shorter rods. The float’s drift could be controlled better, and the longer, softer rods allowed for the use of much thinner line. These outfits have been used extensively since the 1980s and are still popular today, although longer rods are often used on big rivers.

The emergence of centrepins in Ontario was due to the quest for a perfect natural drift with a float. In the past, only a few anglers here used them. More and more started to show up on Ontario rivers in the early 1990s, and during the last 10 years they’ve attracted more converts.

Old dog, new tricks
My first experience using centrepins was last fall. Even as a diehard spinning-reel advocate, I felt the time had come to explore new options. My initiation took place on a trip with Graham Bristow, a guide who runs Anglers Pro Shop in Orangeville. He’s regarded as one of the premier river anglers and centrepin instructors in Ontario. Our plan was to drift the upper Nottawasaga River in November for steelhead.

After launching his custom three-man pontoon boat, our first stop was at the confluence of the Boyne and Nottawasaga. My equipment was a centrepin reel and a 13-foot 6-inch float rod. In a matter of minutes, Bristow taught me how to fling a float with the side-cast technique.

“The side cast is easiest and most effective for beginners,” he said. “The thumb and index finger hold the grip, with the other three fingers folded underneath to rest on the rim of the reel. Use the left thumb or finger to pull the line off the side of the reel at a 90? angle. The right hand will hold the reel stationary. Release the line from the spool while casting out the float. The left hand must remain at a 90? angle, about two feet from the reel, as the line flows through the fingers of the left hand.”

After a few good casts mixed with some erratic attempts, I was able to toss the float into productive drifts. Once the float started its downward drift, the true value of a centrepin was evident. Runs we fished allowed for drifts of 100 to 300 feet by simply letting the float pull line off the revolving reel. Using a spinning reel and controlling the float would have been challenging. We landed five steelhead and only lost one on our 8-hour drift.

Fighting fish wasn’t a problem, since I had experience with fly reels. “All you have to do is palm the rim of the reel to provide a manual drag,” said Bristow.

Stan Pilarczyk, my fishing partner for the day, was a rookie steelheader and had never used a centrepin. “I can’t believe how easy it is to learn to cast and catch fish,” he said.

Casting about
There are other centrepin casting styles. The overhead spinning-style cast creates more distance than the side cast. The loop and double-loop cast, pulling line from the guides, is useful for flipping out a float when shoreline obstructions are a problem. The Wallis cast is the most difficult to learn, but with practice, anglers can cast small, light floats long distances.

A full spool of line helps, too. “Usually, about one-third of the reel is filled with backing and then another 300 yards is added to almost fill the spool,” he added “Eight- to 10-pound mono or hi-visibility floating line are my favourites,” said Bristow.

Your choice
Both spinning-reel advocates and centrepin supporters admit both techniques have advantages. When fishing small streams with thick shoreline brush, a shorter spinning rod is much easier to walk and cast with than a 13-foot float rod. Spinning rods can also be used for tossing lures, achieving long distances on big rivers. Another advantage is that you can free-drift and bottom-bounce. On many small streams in Ontario with 10- to 40-foot drifts, spinning gear can be just as effective as centrepins.

When do they have an advantage? Bruno Ortolin has fished with centrepins throughout Ontario and British Columbia since the early 1980s. “I find centrepins will perform to all my expectations while float fishing,” he said.

On the other side of the debate are steelheaders who favour spinning equipment. Luke Grylls, an angler in his early twenties who fishes extensively on the north shore of Lake Ontario, said, “I catch as many fish as my friends who use centrepins and I’m happy with my spinning gear.”

The number of “pin heads” seems to be growing each year in southern Ontario. “On Lakes Huron, Erie, and Ontario tributaries, almost 50% of anglers use centrepins,” said Almanza. On Lake Superior rivers, James Smedley, OOD travel editor, reports only 5% use them.

Spinning and centrepin reels have attributes that appeal to a variety of steelheaders. I’ve seen how effective centrepins can be, but this doesn’t mean I won’t continue to use my steelhead spinning gear, experiencing the best of both technologies.