Solid Advice for the All-Day Sit 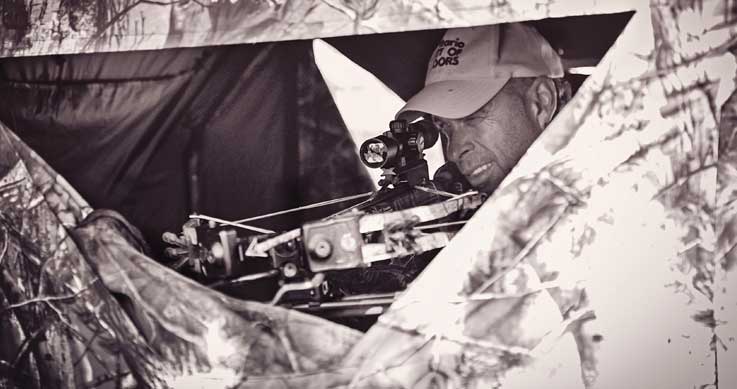 Sitting in a tree stand or ground blind from dawn to dusk for an entire day is an accomplishment. And, it doesn’t get any easier if you have to follow that with a second day, a third, or more. Yet, there might be no better way to get a big buck. Despite the fact it can be a harrowing experience, the all-day sit is really worth the suffering because it works.

Case in point. Last fall, my dad and I were hunting deer just north of Thunder Bay. It was November 11, Remembrance Day. The weather had gone from rainy for the previous 2 days, to very cold and snowy. Worst of all was the wind. It was buffeting from the northeast, and gusting to 60 kilometres an hour. The rut was on, though, and there would be no better time to harvest a buck.

The good news was we were hunting out of ground blinds. These shelters offered us some protection from the elements, especially the wind. The addition of little propane heaters allowed for some extra comfort, as we were anticipating a long sit in a cold blind. Dad was in an opening that had good deer traffic, including a buck and some does just the day before. I was in a spot dubbed “the buck stand” for its history of high-quality deer — usually. Last year was different, however. Fewer big bucks were showing at the stand. Regardless, at about 9 a.m. we were both sitting down in our blinds. The plan was to stay all day, if we could stand it.
The wind was howling and the blind was rocking. It seemed unlikely any deer would want to be out in this stuff. But around 11 a.m., a young doe wandered by. I carefully looked at her, and thought for a second about filling my antlerless tag. But this was buck time, and does are really the best bait you can have for antlered animals. So she walked.

Then, at 2. p.m., a really big doe came in, very hesitantly. She looked nervous, and was steadily looking behind her. She darted off, as if spooked. Was there a buck close?

Worth the Wait
Last light was approaching and it was brutally cold. It didn’t help that the propane was gone. No heat. I’d been sitting nearly 9 hours, and had yet to see a buck. There were only minutes to go. Then, like a ghost, the silhouette of a head sporting a high set of antlers appeared. Through my scope, I found the deer’s chest, took a breath, and squeezed.

A half hour later, I was standing in the dark next to my father, shining a light on my deer. It was a huge-bodied animal, with a thick, 8-point rack.
“Nice buck, son,” said Sr., giving me a high-5. “You sure waited for that one.”

That I did. We both did (Dad saw nothing). It was worth every second in the cold to do it.

Keeping Comfortable
The all-day sit is really only possible if you are comfortable, and at least moderately warm. To achieve this, you need to be dressed in such a way that you can ward off cold and damp. This usually means dressing in layers, with at least one that’s windproof.

Obviously, the wind is less of an issue in a blind or an enclosed stand. Yet it’s surprising how much draft can sneak through even a single open window. In a tree stand, the need to be properly dressed can‘t be overstated. An open stand leaves you exposed to wind, rain, snow, sun, and even bugs. Some of the very coldest sits I’ve ever had have been in tree stands. The temperature doesn’t even need to be that low; the wind can make even a mild evening feel gnarly.

I’ve invested in camo fleece jackets and pants with windproof linings. They’re bulky, and not built for stalking — or long walks — but I’m generally warm in them. Depending on temperature, there’s also a layer of wool underwear between my skin and whatever clothing I have on. Wool is the warmest material I’ve found for long sits, and it stays that way, even if its gets wet. Some wools can be itchy, though, so you might want to wear boxers or another layer in-between.

For sits in a tree stand, except during the warmest weather, a toque on the head is a must. If it’s really cold, a face mask or balaclava is the way to go. Gloves are also keenly important for a sit, and it pays to bring a few pairs. I always have a base pair of camouflage gloves that are skin tight. Some thin gloves have insulating properties as well. In colder weather, having a second insulated glove or mitt is key. Hand warmers, whether air-activated chemical ones, or battery operated, can really save the day. Cold hands have the potential to ruin a hunt, whether you are trying to squeeze a trigger or pull back a bow.

Boots need to be insulated and warm for sits. I use the same boots for ice fishing — thick sole and insulated liners — no rubber gum boots. Insulated or electric socks are also a big help. If you have a long walk in, bring extra socks and change to dry ones. Cold feet will quickly shut you down.

For cold-weather hunts in enclosures, small heaters can be a lifesaver. You need to have good ventilation however, as fuel burning heaters can emit fumes that will make you sick, or worse. I always have a window or 2 open to allow fresh air to circulate. The difference a small heater makes in a ground blind or even open stand is remarkable. I’m not sure I’d have survived that 9-hour sit last fall without one. My hands certainly wouldn’t have worked as well. I usually bring a few extra propane canisters as you don’t want to run out of heat mid-sit.

Other options that work are sleeping bags or special thermal “mummy bags.” You slip inside them and keep as warm as toast, even in frigid air. This technique is employed by many late-season tree-stand hunters, who would likely perish in the cold otherwise.

Chairman of the Bored
Finally, boredom can be a real killer on long sits. Even the most disciplined hunter will get restless and impatient looking at the same strip of bush hour after hour. To keep entertained, some will read books, and others play games. If there’s Wi-Fi, some will text.

Now I know, many people take offence at the idea of doing anything but staring intently at the woods when hunting. And in reality, you can easily miss your moment with your face in a book or phone. I’ve heard some real horror stories about the big buck that got away due to inattention. However, if you make a deal with yourself to do only a small amount each hour, it‘s like a reward for endless sitting. And when that buck, bull, or boar of a lifetime finally does walk in, the reward for all that waiting will be far greater.

First published in the Fall 2014 issue of Ontario OUT OF DOORS. Subscribe now.