Sighting in on bluegills 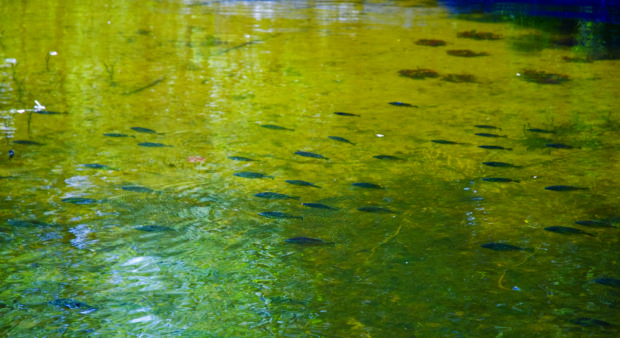 Many of us got hooked on fishing because of sunfish, and the start of the open water season is the perfect time to rekindle your relationship with them. I particularly like spring bluegill fishing. The fish concentrate in the shallows, and are aggressive and easy to catch.

Spring to summer patterns
As ice disappears and spring begins, bluegill wintering groups break up. This is complete when water temperatures reach 50°F. Spawning takes place from late spring to midsummer, peaking in early July, but may extend into August. Male bluegills are the first to inhabit shallow spawning areas, followed shortly afterwards by females. Males stake out their territories and build saucer-like nests, fanning away silt to unveil a sand or gravel bottom. Males guard nests before and after spawning for one to two weeks.

The fish relate to a variety of habitats. Sandy bays and shorelines, as they warm quickly under the spring sun, attract fish. Aquatic vegetation always draws bluegills, too. Typical haunts include sparse growth among sand flats or inside weed edges. Sunken timber is also a bluegill haven before weed growth peaks.

Wood, combined with sand or gravel, is a magnet to spring bluegills. Laydowns and brush piles provide fish with overhead protection from predators.

Last year in early May, a friend and I worked a shoreline on one of the Rideau Lakes and picked off dozens of wood-relating bluegills in two to four feet of water. We also found plenty of fish holding near canal locks and under docks.

Sight fishing stealth
Sight fishing bluegills is particularly effective, but demands a quiet approach. These fish are savvy. Their underwater street-smarts are honed by avoiding hungry largemouth bass and birds of prey. Stealth is a must when working the shallows.

Calm conditions are best. On windy days, move to sheltered bays and shorelines.

Take a slow-and-steady approach by inching your way along with an electric motor. Look for bluegill silhouettes near sunken trees, brush, inside weed edges, mixed sand and weed spots, or bare sand and gravel zones.

Once you spot one bluegill, you’re almost guaranteed more will be around. The questions are, have you been quiet enough not to spook them and are they aggressive enough to bite?

As with any other skinny-water sight fishing, cast your bait past your target and then work it into the strike zone. One important practice is feathering the line as it comes off the spool. Do this as the bait approaches the surface, to reduce the lure’s entry splash. A noisy touchdown often spooks bluegills, while a natural splatter gets their attention.

A soft touch
Working a small jig beneath a float is one of the best approaches for sight fishing bluegills. This vertical presentation appeals to inactive and aggressive fish. Twitch and pause the float, so the jig hops and pauses. When out of the strike zone, reel in the float and jig and toss them to another promising spot.

Soft pastic baits and hair jigs both work on bluegills. Tubes, twister tails, and small shad bodies are great rigged on a 1⁄32- to 1⁄16-ounce jig heads.

Although soft baits catch plenty of fish, bluegills are hard on them. To prolong their life, add a dab of super glue to the hook collar when threading on the plastic. The glue holds the bait in place, delaying the tearing of the bait.

Tied jigs stand up to more panfish abuse and are just as deadly. The filaments of hair, feather, and tinsel jigs flare seductively and wave in a dance that often triggers hits. The material also holds fish scent well. When bluegills are aggressive and willing to chase lures, baits with a horizontal trajectory let you cover water and catch more fish. Jigs featuring spinner blades are good shallow water options. Work these lures on a stop-and-go or yo-yo retrieve.

Small floating crankbaits with tiny hooks are also deadly. Bluegills often slurp meals off the surface. Letting cranks float or working them just under the surface will trigger strikes.

Conservation
Fishing regulations allow you to angle all sunfish during their spawn in most areas. Whether you fish them in spring pre-spawn or during or after the spawn is an individual choice. Keep in mind, though, that plucking males away from nests exposes fry to predation so give fish a break during this time. If keeping fish – and bluegills are delicious – practice selective harvest and release the largest ones. Not all sunfish are genetically predisposed to reach bragging-size proportions, so releasing the lunkers helps keep the bigfish lineage in the gene pool.