The pack: a trapper’s true story 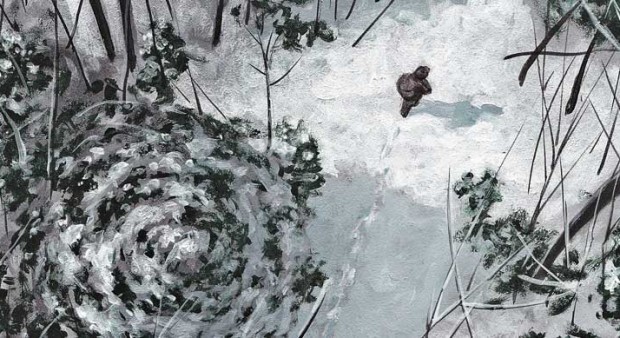 The temperature had peaked at well below zero and was dropping. The wind played a deadly game of tag, slapping the man’s face with icy snow.

Ervin Stack had started out that morning checking the north quadrant of his 90-square mile trap ground. Always honouring the laws and power of nature, he was well equipped for the day. His traps had been boiled outside in a galvanized tub using a century-old recipe: tag alder bark to darken the metal, with cedar and balsam added for a woodsy smell.

It was a clear, crisp February morning, but the ache in his joints foretold a storm. He backed the truck up to a snow bank, bridged the gap with the tailgate and wrestled the snowmobile down.

There is a magnificence in the wintered northern Ontario bush, and as Erv negotiated the scrub brush and terrain, he entered this other world.

He covered the miles to the beaver pond in half an hour. The moose-hide gauntlets kept his hands warm, but he felt the bitter cold nipping his forehead through his red knitted touque. Guiding his snowmobile over the frozen cattails he avoided the stumps lurking below the snow. He had taken out the resident beaver the weekend before and so far hadn’t found any fresh cuttings of birch or poplar to indicate there was another one around. Entering the open space around the pond, he gunned the throttle and headed for the marking stick that anchored his trap below the ice.

He heard the sharp crack. A quick manoeuvre to the left failed to set him on a new course, as there was nothing substantial for the track to grip. The pond was normally about six feet deep, but today he encountered only air for the first four. And then, the jolt as he hit water.

The dam had sprung a leak and with no beaver to repair it the water had washed away the frozen mud and sticks, reverting to its original course. There was only two feet of water left in the pond, but the insatiable mud at the bottom had pulled the heavy machine into its domain. Standing on the seat, Erv used his hunting knife to secure a hold in the ice. As he gingerly slid his weight onto the ice it cracked beneath him. The mud sucked greedily at his feet while he broke the chest-high ice in front of him.

The water had seeped through woollen leggings and leather boots, but the heat generated from the exertion of getting to shore had kept him warm. This wouldn’t last long.

It was 11:20 a.m. The truck was about eight miles away. On a good surface he could cover four miles an hour, but this terrain was anything but good. The thigh-deep snow was difficult enough, what lay underneath was even more challenging. Mother Nature is a pack rat and centuries of forest life had created an accumulation of hidden hazards. Lurking below the smooth surface of the glistening snow were rotten logs and bent saplings to catch his feet, and rocks and boulders to twist his ankles. Optimistically, Erv could be out in four hours. Realistically, seven or eight. With a rueful smile he thought of the snowshoes hanging in his basement.

The wind had picked up as he tried following the snowmobile track, but it wasn’t packed enough to support his weight, and step after step he broke through.

After 40 years of negotiating the outdoors, Erv’s awareness was keen and instinctual.

The cold penetrated his clothes and he knew he would have to keep up a good pace to allay frostbite. Struggling through the drifts, he headed for a small pine tree and cut four small supple branches using his hunting knife. With snare wire, he lashed these to his feet and fashioned crude snowshoes. He managed enough of an opening for his toes to go through, allowing him to walk somewhat comfortably.

Shortly after resuming his journey though, a tingling sensation ran up his spine. Without stopping he peered into the forest depths, for he knew he wasn’t alone. After 40 years of negotiating the outdoors, Erv’s awareness was keen and instinctual. The thick bush of northern Ontario can hide many creatures. It took him only a few minutes to realize that he was being watched by at least 4 or 5, maybe even 7 or 8 wolves. There was no fear, just a knowing. He had to keep moving.

Catching slivered glimpses of the wolf pack shadowing his movement through their territory, he knew they were with him for the duration.

For 5 hours he kept up a steady pace. The foreshadowed storm made its appearance. The blowing snow obliterated the tracks and he travelled by dead reckoning, using his internal compass that never failed him. There was barely any feeling left in his legs and none in his feet. His pace slowed and his muscles screamed their agonies at him. Knowing that hypothermia distorts reality, he refused to listen to the beckoning of his body to sit and rest.

He tried to whistle, but his lips were cracked and he lacked the energy. His friends in the shadows would keep him company.

Realizing the wind was abating, the trapper lifted his head to look around. Adrenaline surged into his chest and limbs as he turned to look behind him. The large, dark forms were just slipping into the woods on either side. He wondered how long they had been walking in his tracks. Reaching behind, he slid his holster along the thick leather belt so that it rested near his right hip. He unsnapped the tooled case and drew the gun, satisfying himself with its heft. Erv released the safety and carefully slid the Colt back into the holster. With hands encased in gauntlets he couldn’t hold it while walking, but derived comfort from having it ready.

Even in the darkness of a late winter afternoon he recognized the clearing as he entered it. Only half a mile to go! He smiled, causing the cracks in his lips to deepen and blood to trickle through his greying whiskers and freeze on his chin.

When at last he stumbled onto the road he knelt beside the truck clutching at the pain that tore through his chest. He forced his frozen fingers around the keys, unlocked the door, and hauled himself up inside the cab, but had to leave his feet outside as he wasn’t able to unfasten the wire of his makeshift snowshoes. His chest was being crushed by a mountain of pain and when the weakness hit his hands, he dropped his keys. Erv’s vision pulsated and his breath came in rasps.

The clouds slipped away and light from the half moon glinted off his keys. He picked them up and shakily worked them into the ignition, then stretched across the seat waiting for the engine’s warm air.

The shivering started with his jaws, worked its way through his shoulders, then down aching muscles into his back. Great, racking, palsied shakes. Forcing himself to overcome the tremours, he sat up and unfastened the wires on his feet. He closed the door and felt the warmth tentatively seep back into his body.

Bit by bit, the pain subsided and he reached for his Thermos. Regaining some movement in his fingers, he unscrewed the lid and the aroma filled the cab. The warm, sweet coffee washed the cold from his lips and chased away the ache in his belly. He made short work of his lunch.

Sleep whispered softly in his ear. As the moon journeyed through the night sky, a distant sound brought him back.

Drawing his gun from the holster he removed the bullets. Putting them in the glove compartment, he found the small silver flask. He sighed as he put it back, but took comfort in knowing it would be there when he got home.

He stepped back into the cold night to close the tailgate. There, in the glow of the moon, he noticed the paw prints. While he had slept, his elusive friends had paid him a visit. And then he heard it. The sound that had awoken him. Listening intently, he stood still and admired the forlorn beauty of the wolf pack’s song as they sang their story to their neighbours in the west.

Ervin Stack was born in Sturgeon Falls, Ontario in 1920 and spent most of his adult life in Timmins. After putting in his shifts at the gold mine, his evenings and weekends were dedicated to hunting, fishing, and trapping. He and his wife Carmen instilled a love of the outdoors in their five children. Author Lee-Ann Stack is the youngest of Erv’s children. This is a true story that happened in the 1970s near Timmins.

Originally published in the Fall issue of Ontario OUT OF DOORS magazine.