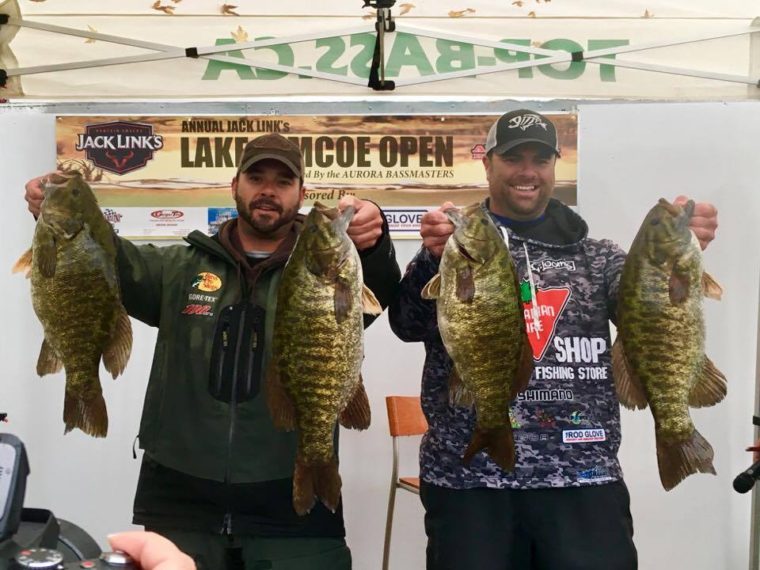 “In it to win it!” is Matt Belzil’s mantra. He and tournament partner Jason Clay did just that with a historic 31.84-pound limit of five bass at the 2017 Jack Link’s Lake Simcoe Open out of Orillia on Saturday, Oct. 28, 2017. The two not only won the tournament, they set a new Canadian 5-bass tournament record, pending verification.

The annual one-day Jack Link’s Lake Simcoe Open is considered the premier smallmouth tournament of the year — and for good reason.

“Having fished the event since 2010 and come so close so many times, we are thrilled to finally win it,” said Clay. “In practice, we wanted to get a feel for the lake and fished spots we normally don’t fish in the tournament. That day, we landed about 28 pounds of bass. That gave us the motivation that we were doing things correctly. In practice, we criss-cross huge areas with the graphs and side scan to find groups of bass. Then, we use an Aqua-Vu underwater camera to verify that they’re bass of the right size for the tournament. If you don’t verify with the camera, you’re wasting your time.”

The 47 teams faced damp, rough conditions at blast-off, but winds calmed down considerably, making it ideal for fishing massive Lake Simcoe. “We landed about 30 bass and lost another 10 during the whole day. We landed our last six-pound bass and culled out a 5½ bass at noon,” said Clay.

Belzil and Clay were not the only ones to surpass the mystical 30-pound mark. Brothers Ryan and Callum Johnson claimed second with 31.06 pounds, anchored by a 7.29-pound smallmouth. Steve Robotham and Sabastian Roy claimed third place with a 30.13-pound total.

In addition to the $7,800 cash prize, there’s a $20,000 bonus for breaking the Canadian tournament record, which will be awarded once Belzil and Clay’s catch is officially verified.

“We weighed the winning catch twice with water and once dry to ensure an official weight,” said Scott Cochran, the president of the Aurora Bassmaster club that hosts the event. “Not only is 20 grand a lot of money, but we want to properly celebrate this feat with an official verification. The rules state the old record must be beaten by 1%.” The tournament scale is set to tenths of a pound, not ounces, making the matter a bit trickier. The past record of 31.55 pounds was set in 2010 at the Open by Joey Muszynski and Mark Moran.

Get a wild hack for fixing a broken fishing rod here.

A bass tournament with my boy