The muskie opener is the day I look forward to most each year. Catching these fish delivers a rush like nothing else on the water. Striking out, however, is also a reality I’ve known. One opening weekend was an example of both. It was a cool, windy and cloudy Saturday. I was guiding guests on northwestern Ontario’s Lac Seul but, despite our best efforts, the day was a bust.

The following day brought a mix of sun and cloud, and conditions were much calmer. By mid-afternoon water temperatures were on the rise and we moved a couple of fish. We pulled up to a sandbar separating a shallow bay from deeper water and the graph indicated a warmer surface temperature than we’d seen in two days.

We started casting on the windward side of the bar, where a pocket of cabbage weeds was emerging. I watched as my guest, Rocco Ranallo, fired a cast close to the bar and began twitching his bait. Almost immediately his rod loaded up under the strain of a powerful hook-set.

“Fish. Big fish,” I heard him exclaim while I reached for the net.

The muskie stayed down and fought hard, with powerful head shakes. When it surfaced boatside, I dipped the net under it. That’s when shock, followed by intense excitement set in — an early-season trophy muskie was staring back at us.

Muskie aren’t easy fish to catch at the best of times, but when you add unpredictable early-season weather, the task becomes even more difficult. Tip the odds in your favour by learning to read weather and water conditions.

Water temperature is the biggest factor for early season success. Everything from fish location and activity level to lure selection hinges on temperature.

It’s no coincidence that Ranallo’s big fish was sitting in the warmest water we’d found. Muskies actively seek it out in early season, so finding pockets of water that are a few degrees warmer than the rest of the lake is key.

In northwestern Ontario where I fish, the surface temperature is usually hovering in the 65˚F range when muskie season opens in late June. If the main lake is 60-something degrees, it’s a sure bet that shallower bays and mainland shoreline areas are going to be warmer.

A map is useful for locating areas that are likely holding warmer water. Look for bays that cut into mainland shorelines. These areas will heat up faster than basin areas in the middle of the lake.

While on the water, pay close attention to your electronics and monitor water temperature. Make a mental note of surface temperatures everywhere you go and concentrate your efforts in areas where temperatures are highest.

I look for large bays with average depths of less than 20 feet. These can range in size from a couple of hundred yards to several miles. If they include a feeder creek or river mouth, they’re even more desirable.

Another surefire way to locate warmer water is to follow the wind. As the sun heats the surface of the water, wind direction will push warmer surface water to shorelines and bays. This strategy is particularly useful on warm, sunny afternoons. Temperatures can rise significantly in a matter of hours and areas that were devoid of fish can suddenly have schools of them. It’s possible to sight big muskies congregating in areas of warm, shallow water. They’ll often sit inches below the surface, plainly visible, soaking up the heat from the water and sun. I rely on this pattern year after year for locating fish. 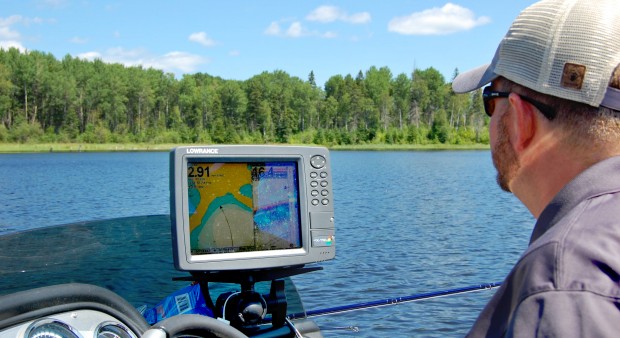 This time of year, bays are typically where the action happens. The bigger the better, as large bays have more features that hold fish. These can include bays within bays, islands, saddles, points, pockets, bottlenecks, creek mouths, sandbars and flats.

Everything from fish location and activity level to lure selection hinges on temperature.

A commonality of productive early-season muskie spots is water with a soft bottom that’s conducive to weed growth. It’s no secret that muskies relate to weeds and this holds true when vegetation is emerging in the shallows.

One of my most prolific spots this time of year is a 400-yard stretch of fairly innocent looking shoreline in a large bay. It works because there’s an 8-foot flat that extends well out from shore with pockets of emerging cabbage weeds.

In June, the weeds are nowhere near the surface of the water. The only way to see them is on a graph. This is another example of how paying close attention to your electronics will help you find worthwhile water.

Not all early-season spots and emerging weeds are hidden from view. Muskies spend time in very shallow water at the start of the season, shallower than many people are willing to believe.

A handful of my fertile early-season spots don’t generate confidence when I bring people to them, and skinny water is one of those spots. At a glance, they don’t look like a place a big muskie would hide. Often they’re not more than 2 or 3 feet deep, and are no more than a cast length wide.

Under the right conditions, however, big fish will sit in shallow water. This happens early in the season when the sun warms up these shallow areas ahead of the rest of the lake.

Locating ideal skinny water means getting to the very backs of bays and into narrow creek mouths. Any pocket or finger of shallow water that’s part of a larger bay is worth a few casts.

When a lure splashes down close to shore in skinny water, don’t be surprised to see a huge boil appear beside the bait, courtesy of a muskie sitting in no more than a foot of water. As soon as this happens, people change their minds about these spots.

Field Tip
Make occasional casts off the side of the boat that’s opposite the structure you’re fishing. At times, fish suspend well off shorelines or other structure and can be missed by casts that are only targeted toward shore.

Start-of-the-season muskie action in the shallows depends on warming water. It gives the fish a reason to be there. However, when a cold front comes through it can cause the water to cool just as fast as the sun has warmed it up. Under conditions of declining water temperatures muskie will pull out of the shallows and set up in deeper water nearby.

Chances are good that fish won’t move very far, so look in the same areas but fish one level deeper. If fish were holding in water less than 8 feet deep prior to the cold front, focus on depths of 8 to 15 feet. Instead of casting tight to shore, keep the boat farther out and work the deep edge of a weed flat. Use baits that get down a little deeper, and work them slower.

Another strategy is to concentrate on the first piece of structure leading out of a bay, such as a point. Muskies use this natural transition between shallow and deep water. I’ll start in productive bays and work the shoreline leading out of the bay, towards deeper water.

There’s no better way to kick off muskie season than with a nice fish in the net. Use weather and water clues to predict fish locations.

Originally published in the June 2013 issue of Ontario OUT of DOORS magazine.

Ben Beattie is a full time fishing guide and outdoor writer, living in Sioux Lookout. His passions are big pike and muskie, lake trout, and walleye. He is also an avid hunter. Ben can be reached at: mail@oodmag.com