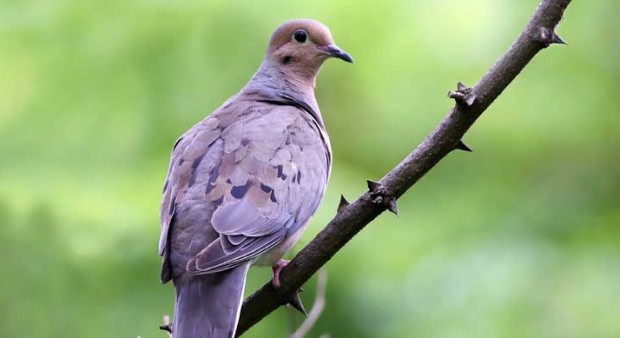 This month, migratory bird hunters visiting southern and central Ontario will learn a little about humility and a lot about why mourning doves are North America’s favourite game bird.

The humility part is simple. A good dove shot is reckoned to be a gunner who hits one out of five birds on average.

It will quickly become obvious why dove hunting is such a welcome addition to our growing list of hunting opportunities. These fast-flying birds are a shotgunner’s dream. They’re plentiful and sporty. They extend our hunting season and allow us to take part in social hunts in wonderful pastoral settings at a great time of year. And, if that isn’t enough, they are one of the tastiest birds you’ll ever eat.

Consider yourself lucky. You are in on the ground floor of what is sure to become a great Ontario hunting tradition.

Why now?
Although it may seem rather sudden, Dr. Scott Petrie from Long Point Waterfowl, says he and other individuals and groups, such as the Ontario Federation of Anglers and Hunters (OFAH), and Delta Waterfowl, have been pushing for this hunt for about 10 years.

To these groups and individuals, it was apparent that mourning doves, despite high hunting pressure in the U.S., were doing very well and there was no good reason not to allow a harvest in Ontario. So letters in support of a hunt were written to the Canadian Wildlife Service, which has jurisdiction over mourning doves, since, like waterfowl, they are a migratory bird.

Petrie says many letters by individuals and groups were sent, but one had greater impact.

“The OFAH letter to Environment Canada carried a lot of weight,” said Petrie.

The process of public consultation for the hunt was carried out with negligible opposition. “I think there was one letter against it,” said Petrie.
Mourning doves continue to thrive and expand their range all over North America.

Petrie says their range and numbers increased steadily from 1967 to 2009 in Ontario.

Based on American statistics on the percentage of hunters who purchase migratory bird licences and hunt doves, Petrie estimates that there will be around 2,000 dedicated dove hunters throughout the province this fall. Based on those same statistics, he estimates they will take about 18,000 birds, or less than 1% of the fall flight — making the hunt sustainable.

He says the hunt will provide economic benefits to the province, too. But he’s more excited about the ecological boon it could provide.
“Once hunters discover mourning doves, we’ll start to see them contributing to habitat work and more research, which will benefit doves and other species too,” he said.

The regs
Mourning dove regulations that come into effect in Ontario this fall are relatively straight forward.

First, to hunt mourning doves, you need a migratory bird permit and provincial small-game licence. Next, you’re only permitted to hunt them with a shotgun loaded with non-toxic shot.

Mourning dove hunting is only permitted in the Southern and Central waterfowl zones. In the former, the season runs from Sept. 5 to Nov. 13; in the latter, from Sept. 3 to Nov. 11. The daily limit in each region is 15 birds; the possession limit is 45 birds.

As in waterfowl hunting, you are allowed to wear camouflage during a mourning dove hunt.

Ways to hunt
How Ontario’s hunters will pursue mourning doves remains to be seen, but most likely we’ll learn a bit from our hunting friends south of the border.

In the U.S., most serious dove hunters set up over fields or watering holes, which doves frequent. Decoys, including robo-doves, are often used. Some hunters also set up between roosts and feeding areas and pass-shoot them. A steady dog that retrieves the birds is certainly an asset, since they are small and hard to find in some cover unless you mark their fall well.

Dove hunting tends to be a social event too, much like a duck hunt. Gunners chat and have fun while waiting for the birds. Uneducated doves fly straight, but all it takes is a little hunting pressure before they fly much less predictably. That’s when it starts to get really humbling.

Many hunters in Ontario will, presumably, take doves incidentally while hunting ducks and geese in fields and marshes. In parts of central Ontario, where doves and ducks are less concentrated, some of us will also take them while hunting upland game. These opportunities will probably occur along trails, old orchards, or watering holes when doves are flushed.

The best hunting in Ontario, however, will probably occur in southern agricultural regions where doves are concentrated. Petrie says cut wheat fields, sunflower fields, and hedgerows are good early-season locations. Non-toxic shot that is typically suited for grouse, waterfowl, and woodcock fired from a 12 or 20 gauge is recommended.
As I wrote earlier, this is yet another great hunting opportunity for the wing shooter and one that you should be sure to try.

However, talk to me this September, after I’ve missed my fifth straight bird, and I might have something else to say.

A version of this was first published in the Ontario OUT OF DOORS 2013 Hunting Annual.