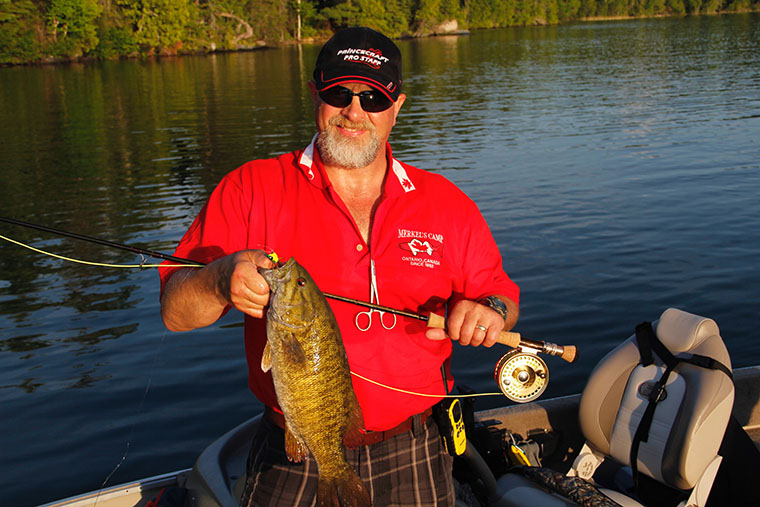 A little imaginary video plays in my head whenever I think of Merkel’s Camp on Wabigoon Lake.

I’m casting a popper fly from a boat towards a rocky shore lined with big pines. Seconds after it lands, a green shape appears from below and engulfs my fly.

Rearing back on the rod, I’m solidly hooked to a bucking 20-inch smallmouth. A big smallmouth on a surface fly is hard to beat.

Merkel’s Camp on Wabigoon Lake is an endearing place. Just a couple of kilometres off the Trans-Canada Highway in the town of Wabigoon.

The lodge is situated on a small point that protects its dock from wind and waves. Quaint guest cabins offer a view of the lake and access to some of the best fishing in the province.

Wabigoon has prolific populations of walleye, pike, muskie, crappie, and smallmouth bass — and trophy fish are common. There’s something about the anatomy of Wabigoon Lake that grows big fish.

I grew up in Dryden, at the west end of Wabigoon Lake, and went to high school with the owners of Merkel’s, Terry and Merrill Kluke. Terry has studied these waters his whole life, so when he told me about the growing opportunities for smallmouth, I paid attention. 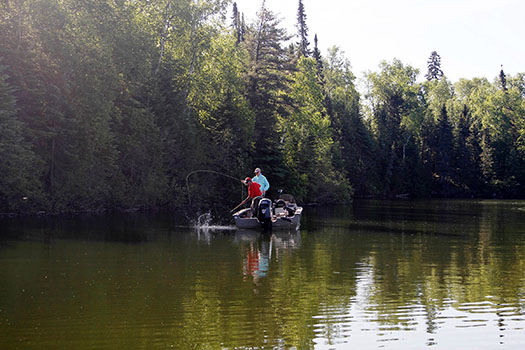 In my youth, fishing Wabigoon from the Government Dock, bass were a rare catch.

Now, the number and size of smallmouth mean that some wise anglers make them their primary focus.

Wabigoon and its adjoining lakes constitute 30,000 hectares of ideal shallow-water habitat with 500 kilometres of rugged shoreline making for some epic smallmouth fishing.

And, the majority of Wabigoon’s anglers are gunning for walleye or muskie, leaving smallmouth relatively unpressured.

In northwestern Ontario, the season is open year-round, so May, June, and early July offer some great opportunities for surface-action smallmouth. 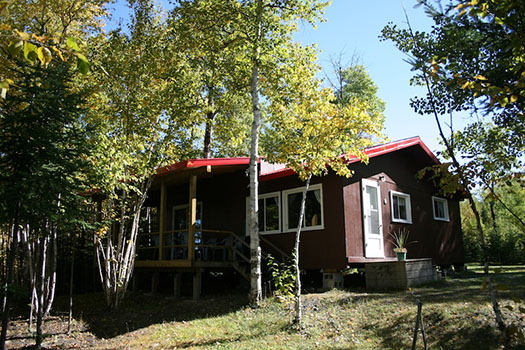 Cabin rentals start at $365/person per week. Family vacation special starts at $1,655 per week for two adults, children under 19, and includes 16-foot boat and 25hp motor.

Wabigoon has a natural occurrence of clay, which gives the water a brownish hue, particularly on windy days. The coloured water warms quickly and provides cover from airborne predators, so smallmouth can be found in very skinny water.

From late July through September smallmouth are found in depths from four to 12 feet, so they are never too deep for light-tackle fishing.

A fast-action 6- or 7-weight fly rod and floating line is ideal for casting cork and deer-hair bodied poppers to smallmouth. In windy conditions, or when the topwater bite dies, add a sink tip line to cast streamers and crayfish patterns.

Knowing that I’m a nut for surface fishing of any kind, Terry suggested I come to chase smallmouth in early June.

We fished popper flies with dime-sized, painted-cork bodies in various shades, with black being the operative colour because of its ability to provide a silhouette to upward-looking fish.

Terry kept the boat about 50 feet from shore while we cast right to the bank.

And we did find some popper-loving bass in those four days of fishing.

On one memorable sunny evening, we hooked and released two-dozen smallmouth. The fishing was so good it became pleasantly predictable; place your popper in the right spot and you were soon into a chunky bass.

This was the evening when that “video” was etched into my brain. I’d duped several bass in the 16- to 18-inch category, but I really wanted to catch a 20-incher.

The fish in that mental video was clearly in that class. But, like many good dreams, when you wake up before the best part, it came unbuttoned before I could bring it to hand.

Find out how to target Algoma bass here.