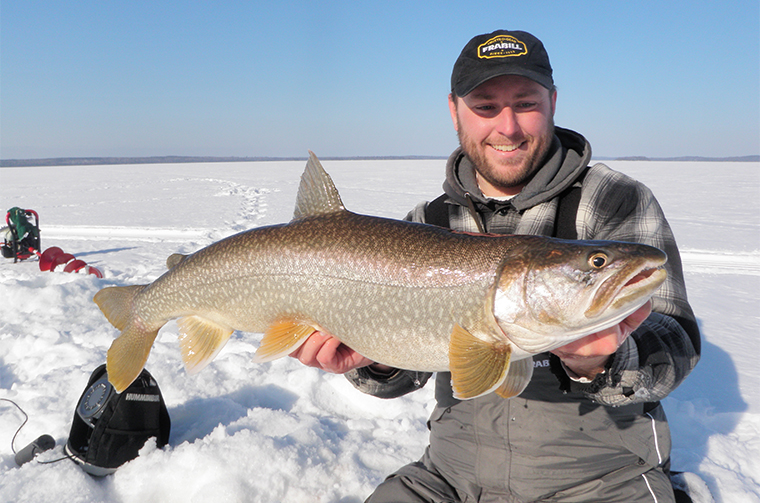 The end of winter may be just around the corner, but the best ice fishing of the season isn’t over. Late ice means great weather and hungry lakers across Ontario’s ice belt.

Lookin’ for lakers
Lake trout are aggressive predators and getting them to bite is oftentimes the easy part. Locating them is what presents the biggest challenge.

During the winter, lakers can be found in almost any depth. I’ve caught them as deep as 100 feet and in as little as 20 feet of water. Targeting spots that provide quick access from shallow to deep water is a good bet for finding lakers. Any piece of structure in or adjacent to a main lake basin is worth a look.

Humps and reefs are textbook laker spots that let you cover different depths in a relatively small area. Prominent points that stick out into a deep-water basin are other high percentage spots.

No matter what kind of structure you’re fishing, drilling a lot of holes ranging from shallow to deep is important. I like to start fishing in the shallow holes and work my way out deeper until I mark fish or hook-up. Once fish are located a handful of different baits will catch lakers anywhere in Ontario. 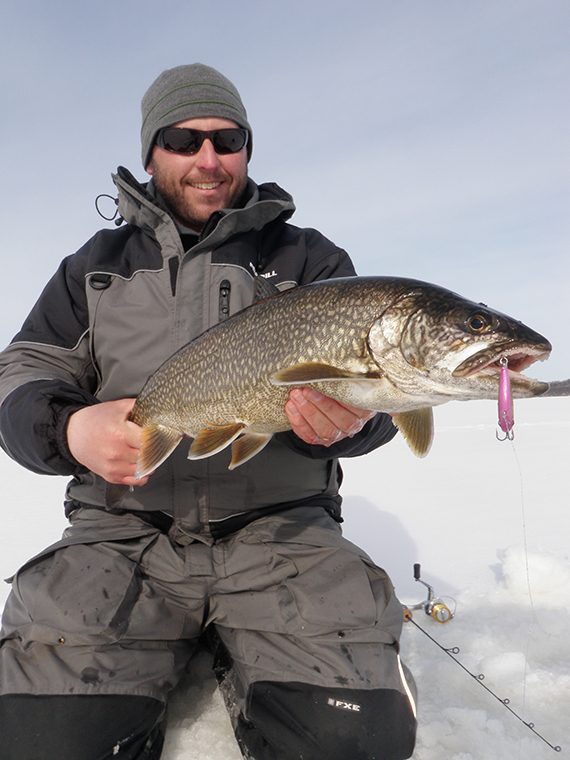 Tackle and techniques
There’s no need to break the bank on tackle when chasing late-ice lakers. Three styles of baits are all you need: spoons, plastics, and horizontal jigging baits.

Three- to four-inch spoons have probably brought more lake trout through the ice than all other baits combined. They are easy to fish and their flash and wobble mimic injured baitfish. Fish spoons with sharp upward jigs before letting them fall on slack line.

Horizontal jigging baits like the Rapala Jigging Rap and Lindy Darter are well worth trying. As the name indicates, they hang horizontally in the water giving them a realistic appearance. After a jigging sequence, let the bait sit motionless in the water for a few seconds. Hits often come during this pause.

No matter what bait you’re using it’s important to cover the entire water column. Lakers are known for cruising anywhere, from just below the ice to just off bottom. One technique that works is to start jigging just off bottom, then after a few minutes reel up 10 feet, and jig for another few minutes. Repeat this process until you’re jigging just under the ice. Don’t be surprised if a lake trout grabs your bait while you’re watching it just under the ice. 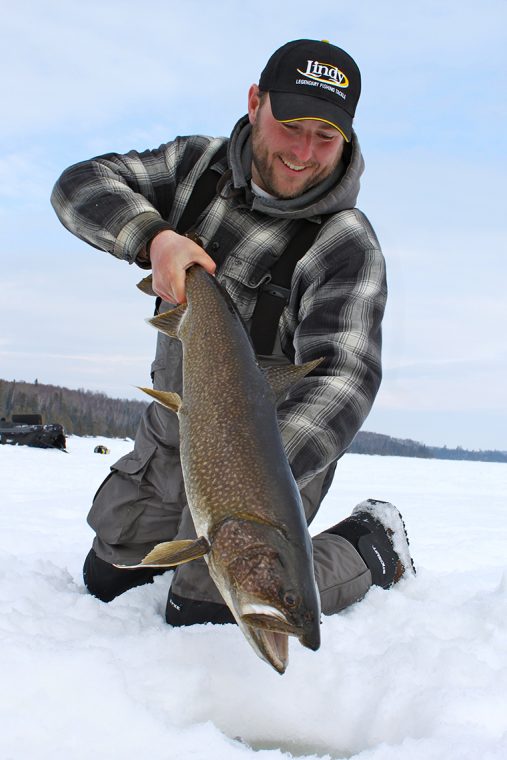 Another technique I use a lot is one I call drop-and-reel. Simply drop your bait to the bottom then steadily reel it all the way up. Lake trout think your bait is a fleeing baitfish, which triggers a reactionary strike. It sounds ridiculous, but it works.

Equipment
On-ice electronics, such as flashers or LCD graphs, are easily the most important piece of equipment you can have. These tools will not only help you know if there are fish in the area, they will show you exactly where they are in the water column.

When you mark a fish, bring your bait above the mark and either jig or slowly reel up. It’s like a game of cat-and-mouse and lakers are known to actively chase baits. Once you play this game with a lake trout and watch it streak towards your bait, then feel the hit, you’ll never fish without a flasher or graph again.

Doing battle with a big lake trout under the warmth of the afternoon sun is one of the best parts of late-season ice fishing. Before you put the auger away for another year, hit the ice for some last-chance lakers.