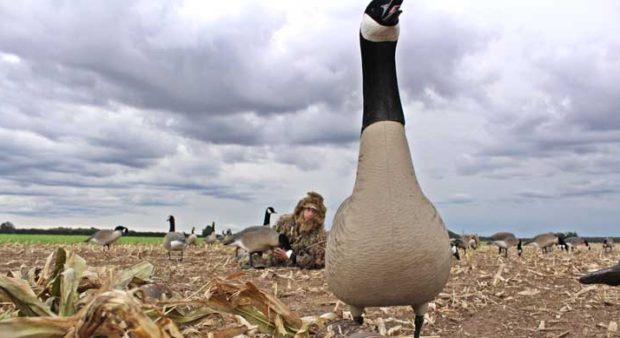 A thin line of birds was barely visible on the distant horizon. As it drew closer, we could hear the dominating “her-ooonk” hail of the lead bird calling out to keep the flock in formation. The geese closed the distance on the field where we anxiously lay in wait. We had done our homework. We had scouted these birds days before. We knew they were actively dumping into this field. Success was at hand.

As the first line of geese closed in on our location, they simultaneously locked wings to start their rapid decent. Long before they were in shotgun range, however, and seemingly without reason, the lead bird broke formation. Its large wings grabbed at the air to gain altitude, and the rest of the flock mimicked it, breaking skyward in mass confusion.

What had happened? No one had fired a shot. We were all expertly hidden and well disciplined against motion. The one hunter in the group who we’d chosen to call the birds did his job well. The decoys were arranged as they had been on successful mornings. Fluke?

Decoy placement, calling, camouflaging, and location are all possible issues, but none fit in this instance. We suspected we were dealing with pressured geese, which meant far more effort would be needed to save our hunt.

Steve Todz has operated Grey Bruce Outfitters for the past 20 years. “Pressured geese have been shot at recently or are used to being shot at in a certain area,” explained Todz. “They are easily spooked by ground blinds, calling, inferior decoys, or just the presence of any activity on the field.”

Geese are wary. The lead goose in a skein is often the oldest and wisest bird. This is the one and only bird you have to fool, but it isn’t  easy. And the challenge is compounded when you have numerous skeins working your field from all directions, as the lead geese will watch one another for indications of danger below. “Sometimes, more geese is not good!” exclaims Todz.

It’s all about attitude
A lot can be learned by watching the first few birds in a skein, especially the lead bird. There is a pecking order amongst geese and the wariest and wisest are always the leaders.

If a flock is approaching your field at high altitude, their attitude can be considered neutral, as the lead bird is likely scouting a number of feeder fields. These high fliers could be pressured birds, or new to the area.

If the flock is flying low on the deck, their attitude is positive; the lead bird is comfortable and already determined to drop in. You are going to win this skein. Setting up for pressured geese.

A lead bird that takes its flock to various heights and changes directions on approach is negative, and will be spooked by anything abnormal in the field. These actions are surely the result of pressured or educated geese.

Location
Pre-hunt scouting is always important. Finding a field the geese are currently using is usually an indication that they will return in the near future. Pressured geese, however, shy away from crowds, whether due to intolerance to competition, or a memory of being fooled by decoys. Todz points out that, “Once we are confronted with pressured geese habits, I will often seek out fields that have smaller flocks of birds using them. It can be a bit of a trade-off, as you may not have as many potential birds to shoot, but the ones that are using the field are easy to get.”

Decoys
When in a positive attitude, geese love company and the safety that numbers provide. Geese under pressure find assurance and security in their own company. “But the realistic quality of the decoy has to be superb to settle pressured geese into a spread comfortably,” says Todz. “As local birds get wiser, I switch all the decoys in my spread to detailed, light motion decoys, such as the Flocked Full Body Honkers by Avian-X.”

Concealment blinds
It’s essential to hide yourself so that you’re comfortable and within shooting distance of the landing geese. This tactic includes many variables, and depends upon the situation. Pressured geese will not tolerate anything that looks unusual or unnatural in the field.

Yet, in recent years, Todz has found that many geese won’t shy away from fence lines, tree lines, or standing corn rows.

“This makes hiding hunters a bit easier, as I try to take advantage of natural cover, and give my shooters the opportunity to sit or stand, rather than lay on the ground.”

Lay-down blinds, commonly referred to as coffin blinds, have become the mainstay of field shooters, but Todz has discovered that geese can become aware of coffin blinds. “I have started using a low A frame blind that hunters sit in above ground,” says Todz. “The Avian-X A-Frame blind has worked exceptionally well for the sketchy birds, but it has to be used against a backdrop, such as a brush line or left over duff in the field.”

Upright sentry decoys are always important, but don’t overdo it. Todz works on a ratio of about 1 sentry to every 10 feeders. “If you have too many sentry decoys, incoming flocks may think they are actually on alert rather than watching over the feeding flock,” he says.

When the geese are landing in the middle of a larger field, Todz positions the A-frame blind at a transition point in the field, such as where the ground changes from harvested crop to plowed, or between differing harvested fields. “The key is to use ground fodder from the same location on the blind to conceal the shooters,” insists Todz.

What you do not want to do is position any blind in the face of the incoming birds. “Place your blind off to the side, perpendicular to the wind direction,” demands Todz, “so that the incoming geese are looking at the walker and feeder decoys and not you.”

Calling
As geese love to be vocal, incoming birds also expect to get some language in return. Return talk from the ground makes birds in flight more comfortable and can actually excite them to hurry in to the supper table, to a point.

“Pressured geese are a lot like late-season geese,” explains Todz. “These birds are not as vocal, therefore they do not expect much vocalization in return. Stick to the comfort calls such as low volume double clucks and growls. Throw in the odd greeting call, but use it sparingly!” suggests Todz.

Listen intently to the calls of the lead bird and ignore the rest of the flock talk. The leader may be calling out to your decoys in one occasional short hail call. Reply with the same, but only once to each of his queries. Even if ‘Ol Smarty can’t be drawn into shooting distance, quite often the flock will split at close range, as some of the younger birds decide to break ranks and join  your decoys on the feed table. You should consider taking these younger birds without hesitation, as the bulk of the skein will likely follow the lead bird… away.

Movement
The debate over mechanized decoys, kites, and flagging rages on! Ducks respond differently than geese to the use of motion, and geese will respond differently as well, depending on their attitude. Todz’s arsenal includes motion wing duck decoys and goose flags. “I use flagging to attract the attention of those flocks of geese say, a half mile out and who are not yet obviously interested in the field,” says Todz. “With pressured geese, I will still flag to them at a distance, but once their eyes are set on my field, I stop and put the flag down.”

Todz uses several motion wing duck decoys when ducks are in the area, but cautions, “Southwestern Ontario geese resent them even at the best of times.”

Ducks generally make flight earlier in the day than geese do, so as soon as the geese start up, it’s wise to pull out any motion wings and stow them away. Todz has found that pressured geese will stray away from motion-wing duck decoys, even if they aren’t in motion. “I am not sure what it is, maybe it is when the motion wings stop with the white under-wing exposed upwards,” Todz speculates.

Canada geese are one of the wariest waterfowl you can hunt. One day, geese will flop into your spread like chickens in a barnyard, then the next day, they’ll become stealth predators.

When the geese get wise, slow your actions down, call lightly, hide carefully, and use the best decoys you can afford. Or, just find a field that is holding smaller flocks of birds. Being a keen hunting detective, scouting, watching, and deciphering the attitude of the geese is often as enjoyable and rewarding as the hunt itself.

Originally published in the 2013-2014 Ontario OUT OF DOORS Hunting Annual.

Getting Started in Goose Hunting

The three Bs of waterfowling