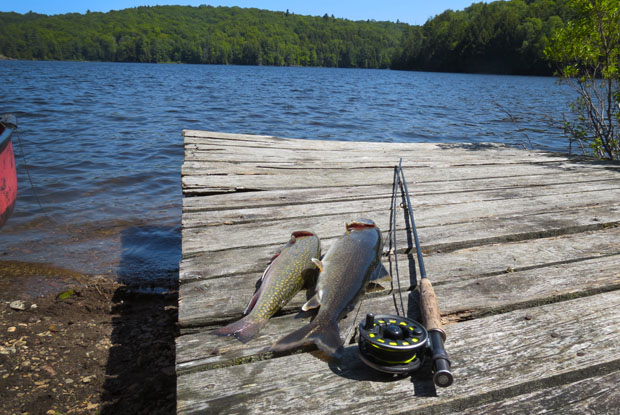 The concern when you visit a reputedly hot trout lake in spring is that you’ve arrived too late. You fret last week’s bite is now the stuff of legends; you worry the water has heated up and the trout have gone deep.

Ron Tenthorey and I had good reason to fear both possibilities as we launched my canoe into one of the Haliburton Forest and Wildlife Reserve’s (HFWR) secluded trout lakes in mid-June of 2013.

Our visit, after all, came two weeks after prime time. Worse still, there wasn’t another angler on the lake — hardly an indication that a good brook and lake trout bite was on.
Even so, it was a peach of a day, with sun, blue skies, and that springtime coolness trout anglers love.

We agreed to paddle upwind and drift back towards the landing, flycasting streamers to likely shoreline cover along the way. One fishless hour later, Ron decided to back paddle to slow our canoe’s downwind progress so our flies could descend deeper in search of fish. This allowed my sink tip line to tick the log-littered bottom some 25 feet below. It was all that was needed to change our angling fortunes.

A fish struck and the take was decisive. I raised the rod and drove home the point of my olive Beadhead Woolly Bugger and less than a minute later, a chunky 14-inch brook trout was in the boat. That morning, in my mind, forever epitomizes the fine fishing that can be had at The Forest, as it’s known, in spring. It is classic lake-style fishing against a backdrop of rugged, secluded wilderness. 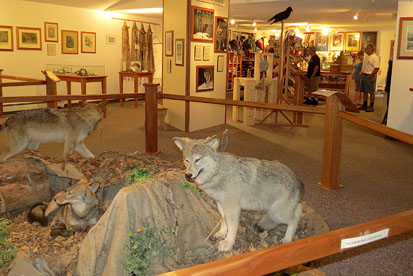 Quality trout
Situated near the town of West Guilford, HFWR is 80,000 acres of pure, outdoor heaven that’s privately owned but open to the public on a pay-per-use basis. The Forest encompasses 50 lakes along with creeks and scores of potholes. Some waters are home to largemouth and smallmouth bass, perch, ling, and suckers, but most anglers visit the forest for the rainbow, lake, and brook trout and splake fishing opportunities within.

Owner Peter Schleifenbaum conscientiously manages this fishery for quality experiences, and in a progressive way. He’s big on monitoring and managing his lakes so natural fish populations thrive. “We have an extensive lakes and fisheries management plan, which deals with each lake individually,” he said. “Through our cooperation with (Ohio-based) Hocking College, we have, I dare consider, the best fisheries and lake inventory anywhere in Ontario and beyond.”

The Forest has a well-earned reputation for accessible trout fishing on secluded lakes.The approach has paid off well.

The Forest has a well-earned reputation for accessible trout fishing on secluded lakes. A list of bragging-sized trout back that up, including a 22-pound lake trout, an 8-pound 2-ounce rainbow, and an 8-pound 6-ounce splake as well as a remarkable 10-pound 2-ounce brook trout, one of three recorded that topped seven pounds. Restricted access and the price of admission, though reasonable, keeps fishing pressure relatively low compared to the rest of the region. So much so, that on a spring weekday, it’s common to have whole lakes to yourself.

Open-water season
Prime time is May and early June. At that time, trout can be found throughout the water column and can be taken by a variety of angling techniques. We had most of our success using a fly rod spooled with a sink-tip line designed to get our offerings down quickly. But, earlier in the season, a floating line allows for more versatility. Ideally, an angler will bring both.

Most of the lakes here are small, scenic Canadian Shield type waters that can be easily explored and fished by a canoe or small aluminum boat and outboard.
Nestled alongside Algonquin Park, it’s in some ways a less-crowded extension of that place — a haven where anglers can fish for trout by boat, canoe or wading streams. Don’t be surprised to hear wolves howling as night falls or see bear ambling along the access roads. The Forest is that kind of place.

This article originally appeared in the June 2014 print edition of Ontario OUT of DOORS.