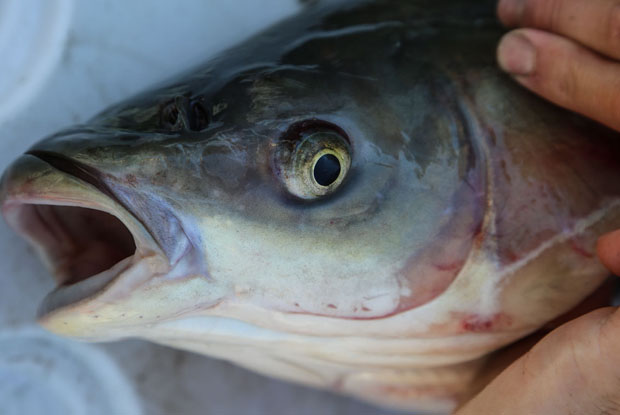 Just weeks after announcing they had caught the first Asian carp in the Toronto area in 12 years, Toronto and Region Conservation (TRCA) say they have caught three more.

This time, three Asian grass carps were caught in the Toronto Harbour. The two fish caught earlier this summer were in ponds inside Tommy Thompson Park.

It was reported that the latest find was a mix of male and female. It’s not known whether they are sterile or how old they are.

According to TRCA, two of the most recent carps were found in the waters around the Toronto Islands marina late last Tuesday. Conservation staff caught them while monitoring fish species in the area. The third was found late in the day on Wednesday in the same vicinity.

The carps were immediately sent to a Fisheries and Oceans Canada laboratory in Burlington for further investigation. The first fish found was 23 pounds, the second weighed 36 pounds and the third was 20 pounds.

As of Sept. 2, crews in electro fishing and trap net boats from TRCA, Fisheries and Oceans Canada and the Ontario Ministry of Natural Resources and Forestry have been conducting coordinated searches for Asian grass carp.

The two male Asian carps caught in Toronto earlier this summer had the ability to reproduce, the Canadian Department of Fisheries and Oceans confirmed.

The mouth and gill systems of Asian carps allow them to ingest large amounts of water at all depths and filter food out. They eat phytoplankton, zooplankton and bottom debris.

Experience south of the border has shown it’s almost impossible to keep Asian carps from spreading once they’ve invaded. At some stage in their life, almost all our native fish feed on plankton.

So all fish — up to and including predators like yellow perch and walleye — could see their populations impacted if Asian carps were to multiply in Ontario waters.

Rick Portiss, the head of aquatic monitoring at TRCA, told Ontario OUT of DOORS in July that the discovery of carps in the area was significant.

“They can be quite destructive to the natural environment.”

Portiss said this type of carp can chew their way through a lot of vegetation that is key to other natural species. “Once you lose that, you lose the habitat for a lot of other key species.”

There are several places to learn more about the Asian carp threat including Ontario’s Invading Species Awareness Program, the Department of Fisheries and Oceans Canada and www.asiancarp.ca.