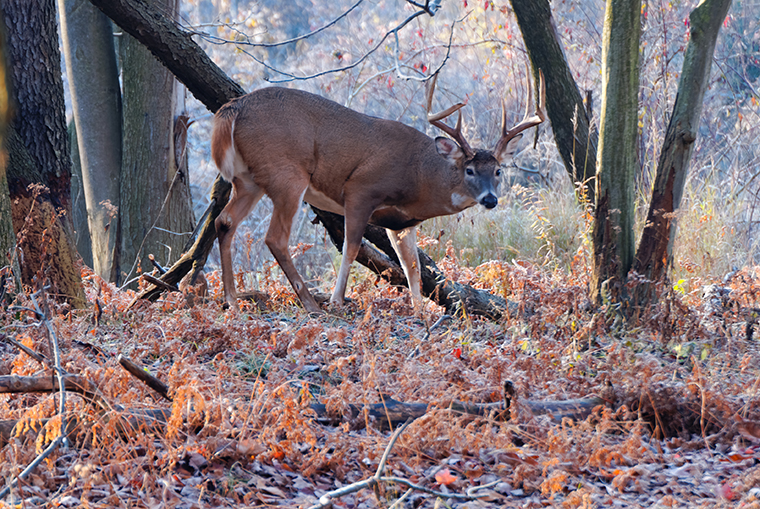 Quebec’s Ministry of Forests, Wildlife and Parks (MFFP) has prohibited hunting, trapping, and fishing over a limited section of hunting zones 9 West and 10 East until Nov. 18, 2018. The action took effect on Sept. 21 as part of an effort to verify the presence of chronic wasting disease (CWD) and limit its spread in cervid populations.

In a press release, MFFP said the closed area accounts for less than 5% of the total area of the two zones.

The Quebec Ministry of Agriculture, Fisheries and Food and the Canadian Food Inspection Agency have confirmed that the affected animal was a red deer. Initially, the species of deer was not reported

In their initial response, the MFFP set up an enhanced-monitoring area buffering the closed area where hunters must report to registration stations for sampling of their harvests. Also, cervids harvested within a 45-kilometre radius of the area must be registered and butchered within the area to avoid the potential spread of the disease beyond the control zone.

According to the Sept. 21 press release, “Field officers and the MFFP will collect and analyze samples free of charge, and the hunters will be told whether or not the animals they have killed are carriers of the disease. CWD is not considered to be transmissible to humans, but consumption or use of flesh or tissue from infected animals is not recommended.”

In addition, Québec’s wildlife protection officers and specialist teams will identify, kill, and sample white-tailed deer in order to obtain conclusive results. When asked why angling is also prohibited in the controlled intervention area, Nicolas Bégin, wildlife media relations officer for the MFFP responded that, “For safety reasons, we want the least amount of people possible in the area…”

Hunters are still able to use their licence where hunting is permitted, but they have the option to have their licence cancelled and refunded, as long as they meet specific requirements. For more information, send a request to info.dalp@mffp.gouv.qc.ca.

A map of the affected area is available on the MFFP website.

The first case of chronic wasting disease (CWD) in Quebec was discovered on Sept. 10. Quebec’s Ministry of Agriculture, Fisheries and Food found the disease in a deer that came from a cervid farm in the Laurentians region.

That farm has been quarantined and Quebec’s Ministry of Forests, Wildlife and Parks (MFFP) and the Canadian Food Inspection Agency are collaborating to contain the disease.

A Sept. 14 MFFP press release says the department will implement proven measures to protect wildlife outside of the farm, which involves collaboration from hunters.

Those actions include considering a hunting ban in portions of hunting areas 9 West and 10 East, the closest areas to the cervid farm. Current regulations prohibit movement of captive cervids within 100 kilometres of the infected farm.

Sick or strange acting animals can be reported to the Canadian Wildlife Health Cooperative, at www.cwhc-rcsf.ca.

For more information on handling and processing caracasses click here.

In addition when an animal is slaughtered in hunting areas near the site, the transportation of certain anatomical parts outside the area is now prohibited.

The province of Quebec has been monitoring its cervids for CWD since 2007 and has tested 9,500 animals since then. This is the first that has tested positive.

CWD is not considered a communicable disease to humans. However, it is not recommended to consume or use the tissues of an affected animal.

MFFP is also asking hunters to report any animal that shows signs of CWD. These include: excessive leanness or a deteriorated condition; excessive salivation and urination; a subtle tremor of the head, low head, and ears; splayed limbs when standing; lack of coordination; abnormal behaviour; and a dull, pale, and bristly coat.

“CWD is a major risk to all members of the deer family,” said Ontario Federation of Anglers and Hunters Wildlife Biologist Keith Munro. “Hunters can help protect Ontario’s deer, moose, elk, and caribou by participating in the MNRF’s CWD monitoring program and by reporting sick or strange acting wildlife. Anyone hunting outside of the province must follow the rules around bringing cervid carcass parts into Ontario.”