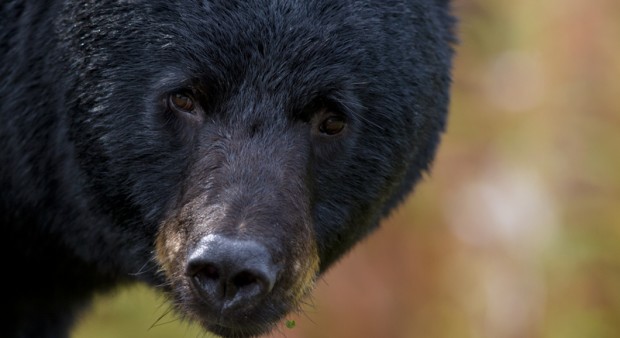 To hunt bears over bait, you just throw out a pile of day-old donuts and some rotten fish guts or meat scraps, right? Well, that instruction manual might work occasionally, particularly for young bears that haven’t encountered a man-made meal before. But if you’re after a mature bear of magnum proportions, more advanced strategies are probably required. Here’s what 2 seasoned guides and 2 hunters have learned from their experiences bagging monster black bears.

• Don’t waste time and energy baiting until you know there’s a big bear in the area. When you find a likely looking spot, usually around a swamp or other water, hang a few trail cameras and stinky baits (rotten meats wrapped in burlap). Only if a trophy bear makes an appearance do you set up actual baits.

• Every week, place 25 to 30 pounds of bait into a white 45-gallon plastic drum (white makes it easier to distinguish a bear at the bait). These arenoften free at auto service garages as they are used for shipping antifreeze. Lay the drum on its side to keep the bait — usually small items, such as popcorn or specially-formulated bear pellets — from being ruined by rain. Small bits of food prevent a bear from grabbing a piece of bait and running back into cover to consume it. The drum also allows you to judge the size of the bear at the bait, as a barrel will hold roughly 250 pounds of bait.

• Cut a 10 x 10-inch hole in the end of the barrel and stack large logs up against and inside the opening to keep birds and small animals out.

• Collect used cooking oil from local restaurants. There’s often a dumpster out back that they have to pay to have hauled away, so ask if you can take some instead. Pour 1 to 2 gallons a week over the ground and on rotten logs (not live trees) around the bait. Bears and other critters will step in the oil and track it throughout the woods, creating trails to attract and lead other bruins to your bait.

• Place your baits in thick cover,which gives mature boars the sense of security they need to approach during daylight, but clear the underbrush all around the bait to allow for a clear shot.

• Mature bears can become accustomed to a permanent tree stand and will only approach when it’s unoccupied. To fool a wary boar, set up an additional portable stand nearby; hopefully he will think the coast is clear.

Bruce Wilkins
Bruce Wilkins operates Golden Eagle Camp and Outfitting northwest of New Liskeard. Golden Eagle has been hosting hunters and anglers since 1947 and runs one of the most successful bear camps in Ontario, with hunters harvesting dozens of big bears annually. Wilkins has the following advice for advanced bear baiters.

• Start baiting in mid-June to get your baits out before the local blueberry crop becomes a food source for bruins. You want your baits to become part of the bears’ daily routine, instead of playing second fiddle to the berries. Bait every second
day until 2 weeks before the season, and then daily right through the hunt.

• Use 45-gallon steel drums, and stand them on end, as only bears will be able to knock them over and squirrels, raccoons and skunks can’t climb up the sides. Use the drum to judge the size of a bear, as any boar whose back reaches the top of the drum is a big bear.

Author’s tip
The opposite of this trick can also be used when several baits are active in an
area but there aren’t enough hunters to cover each stand. By placing a piece of clothing in the stand(s) that won’t be occupied, bears may avoid that bait(s) and instead hit the bait(s) being hunted.

• Be particular about your bait. Use meat and scraps early on, as the bears are craving protein after emerging from a long winter’s hibernation. (Wilkins has ready access to fish scraps from his fishing camp, and while he thinks rotten fish, not guts, is a great “call bait” for attracting bruins from a distance, he gives them actual food when they arrive. This includes edible fish pieces and scraps. Wilkins doesn’t believe bears are particularly fond of rotten fish or maggot-infested meat.)

• Leave a piece of scent-laden clothing on your stand when you aren’t hunting. This allows the bears to become accustomed to the presence of your scent.

• If you are busted by a big bear that spots you in or around your stand, don’t give up. Move the stand a bit, or set up a ground blind nearby.

Rocky Crawford
Rocky Crawford has harvested more than 30 Ontario bears in his 30-plus years of hunting these impressive beasts, most with a bow and many of massive proportions. He also assists many other hunters each year in baiting bruins. These are a few tactics he has adopted over a lifetime of bear hunting.

• When hunting over large natural food sources, such as apple orchards or oat fields, set up your stand to intercept bears as they approach from their bedding areas.

• Place your stand on a major game trail. These are easiest to locate in late fall with the first good snow, or in the spring when the snow starts to melt.

• If there are multiple game trails leading to the bait, try to condition bears to use a single trail by placing 2-pound frozen clumps of meat scraps (Crawford calls them meatsicles) daily on that trail. It usually takes about a week to train a bear in this way.

• A wise old bear will want to approach from downwind. Try to place your stand in a way that a bluff, lake, or other large natural obstacle will prevent this, although such locations can be hard to find.

Shawn Galea
Shawn Galea is one of the owners of Advanced Taxidermy & Wildlife Design, and one of the most hard core and successful bear hunters I’ve met. Although he hunts strictly with a bow, he rarely fails to harvest a bear of at least 300 pounds. That has included many record-book bears and 3 over 500 pounds in the last 6 years, which is when he refined his baiting tactics. Galea shares some of what he has learned through trial and error.

• Each time you freshen your baits you educate the bears, and encourage them to hit only at night. Bait only once, 5 weeks before the season, and don’t touch the bait again. (A wise old bear that’s become accustomed to the bait might see or scent you and change its routine). Consider using a cellular trail camera that sends photos to your phone or computer.

• Create a food source, not just a treat. Put out enough bait to last about 5 weeks if 10 bears are hitting the bait 4 to 5 times a day. Build a bait station made of a large frame of 2 x 4s to hold 6 55-gallon drums upright, with each drum in its own slot to prevent them from being pushed over. Cut a hole in the side of each drum and attach a flap with chains to keep birds out. The frame is V-shaped and pointed directly away from the stand, which gives you a perfect bow shot. (It takes Galea and 3
buddies an entire day to fill 3 of these stations, which are placed according to wind directions.)

• Use baits that won’t decay or rot, such as cookies and other sweets. Bears like donuts too but they are more perishable, so consider a seventh donut filled barrel off to the side. This adds to the amount of food available and the bears will eat them first.

• Take the fryer oil (Galea likes KFC) trick a step further. Determine what direction you want the bears to approach from based on wind. Fill a backpack pressure sprayer with the oil and create a “drag line” by spraying it on the ground and on dead trees (it may kill live trees) in a straight line out from the bait in that direction. Walk for about 5 minutes spraying as you go, using less oil the farther away you get so that any bear crossing the trail will know which direction the bait lies based on scent intensity. Create just 1 main trail of oil as that’s what the bears will use. The trail also aids in recovering a bear after the shot, as they will usually run off down the same trail.

• Create a “stink bait” mixture as an attractant of water and animal parts (being a taxidermist, Galea has an ample supply). Fill a 5-gallon bucket with this concoction and place it about 100 yards from the actual bait, along the oil trail.(Galea prefers an elevated location to help the wind broadcast the scent.)

• Never walk between your stand and the bait as this will create a trail that bears might also use, and they could see or scent you.

Time To Graduate
If you’ve moved beyond the basics of baiting bears and are ready to bag a bruin this fall, shorten your learning curve and heed the advice of these experts.

This was first published in the August 2014 issue of Ontario OUT OF DOORS.