Asian carp: are we doomed? 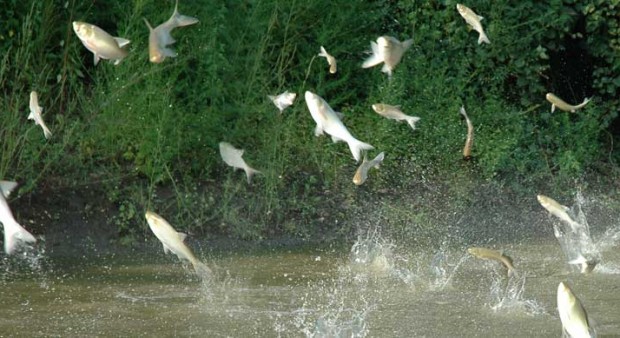 Silver carp jump out of the water when disturbed by motors, creating a safety issue for anglers, recreational boaters, and water skiers.

The thought that Asian carp could invade Ontario waters is unsettling, not just for this province’s anglers, but anyone interested in the health of our nation’s aquatic ecosystem.

A report by the U.S. Geological Survey (USGS) that grass carp are naturally reproducing in the Sandusky River, a tributary to Lake Erie in north-central Ohio, went viral this week and has put a serious scare into many people. But to those in the know, this news wasn’t a big surprise.

“The number of grass carp found in that area seriously points to a breeding population. This [study] confirms everybody’s gut feeling of what was going on there,” said Kim Cuddington, a biology professor at the University of Waterloo.

John Goss, who heads the Asian carp program run by the White House Council on Environmental Quality, said sterile grass carp have been found in the Great Lakes for years, but the discovery that they can reproduce within the watershed “reinforces why we must continue to execute the aggressive strategy to keep silver and bighead carp out of the Great Lakes.”

The biggest threat
The bighead and silver carp are of greatest concern in the Great Lakes region. These species of Asian carp are prolific breeders that gobble huge amounts of plankton—tiny plants and animals that are vital to aquatic food chains. Scientists say if they gain a foothold in the lakes, they could spread widely and destabilize a fishing industry valued at $7 billion.

Some argue that grass carp are less worrisome because they eat larger plants instead of plankton and don’t compete with native species. But, these fish are a threat to wetland areas, which typically serve as native fish nurseries.

“Current research indicates that the Great Lakes Basin will provide suitable habitat for the survival and reproduction of all the Asian Carp species,” said Sophie Monfette, invading species awareness program coordinator with the Ontario Federation of Anglers and Hunters. “If Asian carps colonize the Great Lakes Basin, they will harm our fisheries through competition for food resources and habitat degradation, potentially resulting in a loss of the benefits enjoyed by anglers across Ontario.”

Duane Chapman, a USGS fisheries biologist, says that all Asian carp species require similar conditions to reproduce successfully, so the Sandusky River discovery suggests it’s likely that any of the Asian carp species could spawn there and in many other Great Lakes tributaries.

Fisheries and Oceans Canada has established that there are suitable spawning conditions in up to 57 Canadian rivers, in addition to the extensive wetland areas.

None in Canadian waters
Becky Cudmore, program manager for the Asian carp program with Fisheries and Oceans Canada, said the confirmation of reproducing grass carp in the Sandusky River was a bit sobering, but she confirmed, “There is no evidence that Asian carp have established in Canadian waters.”

That doesn’t mean Canadian authorities are taking the issue lightly. “We have been pretty vigilant this past summer in setting up early detection sites and monitoring the Great Lakes. This news reminds us to be very vigilant as we move forward.”

1. Don’t release any live fish into Ontario lakes or rivers (except when catch and release angling). If you catch an Asian carp, it should be destroyed and not released back into the water.

There are a few ways that these aquatic invaders could get into our waters, with direct spread being the most likely. Cudmore says that live trade is also a serious possibility.

What’s being done?
It’s illegal to possess live bighead carp, silver carp, grass carp or black carp in Ontario. According to the Ministry of Natural Resources, people have been convicted and received large fines for trying to import truckloads of live Asian carp into Ontario to sell at fish markets.

Fisheries and Oceans Canada is working toward developing national aquatic invasive species regulations to list high-risk species from being imported into the country.

Cudmore says those working in the field to mitigate the Asian carp issue are taking a multi-pronged approach. Boosting public awareness and early detection are the primary focuses.

“The more eyes we have on the water, the better for us. The sooner we find them in the system, the sooner we get them out,” she said. “It doesn’t give them a chance to get a firm hold in the ecosystem. A big part of our program this past summer has been monitoring and surveillance.”

What is our fate?
Preventing these invasives from entering Ontario waters is the best defence, but even if Asian carp do establish here, getting rid of them is still possible.

Cudmore sites the ongoing sea lamprey program on the Great Lakes as an example and says it has been successful at keeping the numbers of these creatures down, minimizing their impact.

“It’s easier to focus on prevention and eliminate the individuals as soon as we find them. It isn’t impossible to deal with a well-established population, it’s just more difficult and more expensive.”