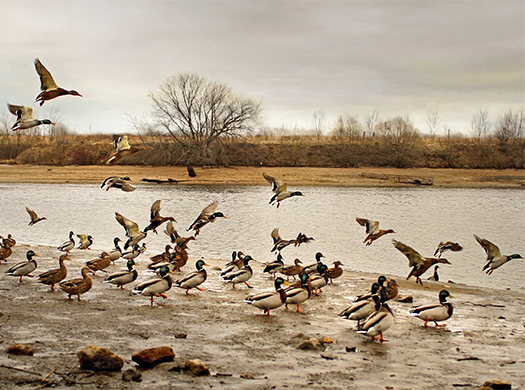 Outdoor groups are encouraging waterfowlers to let their opinion be known on a proposal for Canada’s Migratory Birds Regulations that could end baiting. The proposal could also have an impact on critical habitat as well as public and private hunting areas.

Under current regulations, baiting must stop more than 14 days before the opening of waterfowl season. Any baiting after that can only be done with a permit and the proviso that no hunting will take place within 400 metres of the baited area. Hunting over flooded agriculture fields is currently not considered baiting and faces no restrictions.

Currently, Environment and Climate Change Canada (ECCC) states there are less than 50 baiting authorizations issued across the country.

As part of ECCC’s modernization of the regulations, several options for baiting permits and intentionally flooding fields were examined. The recommended options are to discontinue baiting and no longer allow deliberate modification of crops for hunting purposes that are not part of agricultural practices.

In Ontario, the areas most impacted if baiting was to become illegal would be the Great Lakes Wetlands. This includes private clubs and public hunting areas such as Long Point.

“The Ontario Federation of Anglers and Hunters (OFAH) has serious concerns and if it (baiting) becomes illegal, there could be serious social, economic and recreational impacts,” said OFAH Fish and Wildlife biologist Dawn Sucee.

“The feed ponds attract birds to our marsh and maintain birds in our areas,” said LPWA president Glen Hanson. “That, in turn, provides a quality waterfowl hunt to your average hunter at a price they can afford.”

Hanson said the result is “a fair hunt” and a huge amount of birds, that aren’t harvested, are fed before migrating further south. His fear is if baiting ends and the quality of the hunt goes down, hunters will no longer use the blinds, negatively impacting the association finances. That could spell the end to the thousands of dollars LPWA spends on wetland enhancement.

The fear is a similar situation could reverberate through private clubs, which hold thousands of acres of Great Lakes wetlands, and if the clubs cease to operate the wetlands could be turned into agriculture fields.

This is already an issue in the Lake St. Clair area where three wetlands have already gone under the plow in the last 10 years.

“A lot (of hunt clubs) are dependent on flooding corn or baiting,” said Delta Waterfowl CEO Scott Petrie. “They put a lot of money in that infrastructure, some to the tune of hundreds of thousands dollars. By changing the policy, their value changes substantially and a number of them will certainly be drained and become vegetable farms.”

He pointed out this is valuable staging habitat for waterfowl, and a great source of biodiversity. “We’ve already lost 90 per cent of our coastal wetlands,” he said. “The loss of more shouldn’t be tolerated.”

“It could reduce available staging habitat and food for staging waterfowl,” Sucee said.

Brennan said he plans on talking to stakeholders and supporters in different areas.